The Wendy Davis Filibuster: A Summertime “Texas Spring,” or a “Breakdown in Decorum and Decency”? 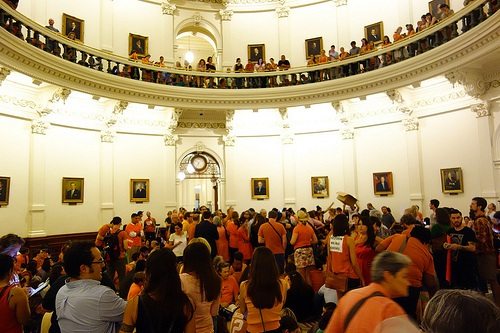 Texas State Sen. Wendy Davis held the floor of the legislature, reading tales of the experiences of women and abortions in an exhausting 13-hour filibuster. It may have only temporarily killed SB5, the bill outlawing abortions after 20 weeks’ gestation, but it served as an attractor for hundreds of supporters who showed up, packing the galleries to make their voices heard.

On Twitter, Davis supporters used the hashtag #StandWithWendy to keep up a steady commentary. A live stream on the Internet attracted 200,000 viewers who tuned into the last section of Davis’s filibuster, and 400 protesters in the visitors’ balcony chanted loudly to prevent legislators from acting on the bill before the session ended at midnight.

“I think it was the Texas Spring,” commented Terri Burke, of the Texas ACLU. “I think the ground shifted in Texas last night…it’s not just about abortion.” She added, “In Texas, this right-wing extremism has dominated our politics, and finally those in the middle, and those who are left-leaning, have found their voice. They really finally realized there were more of them than they thought there were.”

Here is a video of one of the attempts to stop Ms. Davis for a violation of filibuster rules:

Governor Perry has already declared that he will call a special session on July 1st to re-raise the issue and he has called the supported filibuster a “breakdown in decorum and decency.” NPQ would love comments from the readership on this.—Ruth McCambridge