The Whistle and the Damage Done: NFL Ends Refs Lockout 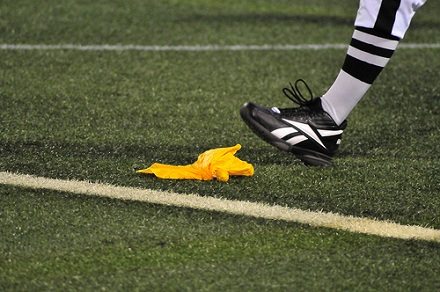 After a bitter three-month lockout, the National Football League (NFL) and the NFL Referees Association have reached an agreement that has brought the regular referees back to the field to officiate. After weeks of questionable calls by the “replacement refs” that the league brought in, the refs’ union was handed the ultimate bargaining chip when the replacements awarded the most recent Monday Night Football game victory to the wrong team (based on very convincing video evidence that suggested a last-second touchdown call for the Seattle Seahawks should have been ruled an interception for the Green Bay Packers).

Even President Barack Obama and Republican vice presidential candidate Paul Ryan agreed that the call—which a replacement ref reviewed at the time but somehow didn’t find to show what the rest of the sporting world saw plainly—was, as the president put it, “terrible.” And the damage done may not even be over yet; should the Packers or the Seahawks be involved in a close race for the playoffs, every sports commentator in the U.S. will point to the “victory that wasn’t” in questioning the legitimacy of NFL playoff seedings.

This, however, was just the latest in a long line of mistakes on basic rules of the game and a general lack of control on the part of the replacements that translated into several games degenerating into little more than chaotic brawls. As Sports Illustrated notes, “They say you only miss what you had once it’s gone, and football fans these past three weeks have painfully learned the meaning of that axiom.” In the end, the NFL agreed to improve the referees’ salaries and to offer retirement benefits for all newly hired officials now and for all refs starting in 2017.

NPQ has noted this in the past, but because it is so inexplicable, it bears repeating that the NFL is somehow organized as a nonprofit entity—despite the fact that it makes billions of dollars in profit and is basically a monopoly (for more on that, see this 2008 Cohen Report). Given the NFL’s atypical nonprofit status, we wouldn’t suggest that other nonprofits view it as a peer. That said, and at the risk of sounding like a Monday morning quarterback (sorry, couldn’t help it), there is a reminder here for nonprofits: when dealing with a conflict where the writing is on the wall that you will need to compromise, do so fast and proactively rather than waiting until the writing on the wall turns into a slap in the face.

Or, if you’re not sure how to move forward, you can always run your scenario by NPQ’s own Dr. Conflict. –Mike Keefe-Feldman