They (Not We) Shall Overcome: Private Largesse and Public Education 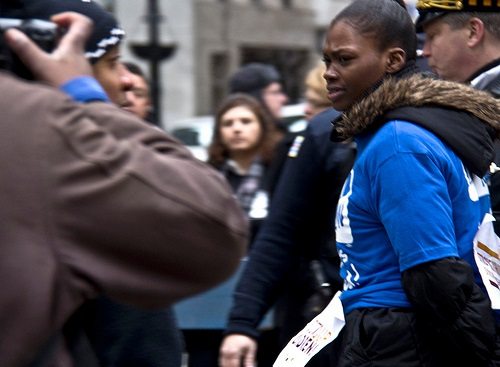 A reprint from Dissent magazine.

Rooted in the gospel tradition, the song “We Shall Overcome” became an anthem of the African‑American civil rights movement in the 1950s and 1960s and then an assertion of struggle and solidarity worldwide. Solidarity is at the heart of both the song and the phrase “we shall overcome.”

Given that history, it’s both perverse and predictable that Philanthropy magazine titled its Spring 2013 cover story “They Shall Overcome.” The long article—written by then editor-in-chief Christopher Levenick—profiles five of the wealthiest backers of free-market K–12 public education reform (publicly funded but privately run charter schools, publicly funded vouchers for private schools, evaluating teachers and schools based on students’ standardized test scores, closing large numbers of schools based on test scores or to save money, and the like).

At first I thought the title inadvertently reflected the top-down, donors-know-best approach of “big philanthropy”: we do our good works for low-income and minority children in urban public schools, and as a result they shall overcome the difficult circumstances of their lives. But as soon as I began reading, I realized that the title refers to the rich folks, to the philanthropists who—with their money and the correct political strategy—shall overcome. They shall overcome opposition to their brand of “ed reform,” especially the opposition of teachers, their unions, and parents.

The political strategy boils down to this: it’s not enough to have the right policy ideas or even to build public support for them; donors must spend their money to elect like-minded politicians who will translate ed-reform ideas into law. To implement the strategy, major philanthro-ed-reformers should set up 501(c)3, 501(c)4, and 527 tax-exempt organizations. Together, these organizations allow a donor to pour unlimited amounts of money into “educating” anyone and everyone on the issues, lobbying lawmakers, and funding political campaigns.

The article breaks no new ground. People who follow the struggle over ed reform have probably seen the video of Jonah Edelman’s notorious presentation on political strategy at the Aspen Ideas Festival in June 2011. I’ve investigated the strategy from a critical perspective in Dissent. But the Philanthropy article is as much a paean to mogul philanthropists who are helping to privatize public education in the United States as a lesson in strategy. This makes sense for a magazine that is the house organ of the conservative Philanthropy Roundtable, an organization based on these beliefs: “Philanthropic freedom is essential to a free society; a vibrant private sector generates the wealth that makes philanthropy possible; and voluntary private action offers solutions for many of society’s most pressing challenges.”

The profiles of the philanthro-ed-reformers provide upbeat success stories. The first is about John Kirtley, who left Wall Street in 1989 to cofound a venture-capital firm in Florida. In his spare time, he launched a campaign to give dollar-for-dollar tax credits to corporations that fund scholarships for low-income families to send their children to private schools, including religious schools. The tax credits channel money away from public coffers to private schools, which is a step in the direction of privatization. Kirtley and his allies won enough legislators to their side to get a statewide program passed in 2001. Over the next three election cycles, they spent $4.5 million through their 527 organization to elect additional legislators who would expand the program and set up a trigger mechanism to raise its funding cap automatically. In 2010, the bill they supported passed the Florida legislature.

After Kirtley’s profile come the stories of better-known philanthro-ed-reformers. There is John Walton, one of the heirs to the Walmart fortune. He “served as a Green Beret in Vietnam. He saw vicious combat—but the fight of his life turned out to be education reform.” There is former New York City mayor Michael Bloomberg, who implements the ed-reform strategy by spending his personal funds lavishly on candidates and issue campaigns around the country ($330,000 in the 2012 Louisiana school board elections alone). Then there is John Arnold, one of Enron’s “most aggressive—and successful—natural gas traders.” After Enron imploded in 2001, he started a hedge fund specializing in natural gas and retired in 2012 “at 38 years of age and with an estimated net worth of $3.5 billion.” He and his wife Laura now devote themselves to philanthropy, much of it directed to K–12 reform. They aim to make their favorite policies permanent—“embedded in the system, and we can move on to other things,” says John.

There is also a lengthy retelling of über-reformer Michelle Rhee’s story, although she doesn’t qualify as a philanthropist—she spends other people’s money. Her goal is an outlay of $200 million a year on ed-reform politics, but no one knows exactly who funds her work. She runs the money through her organization Students First, a 501(c)4 that allows her to keep the donors anonymous.

Nowhere in the article is there mention of the parents, students, and educators nationwide who oppose the philanthropists’ agenda. The author describes “some 5,600 people” who marched in Tallahassee in 2010 to support the private-school scholarship legislation. But there’s nothing about the 220 mostly African-American community leaders and activists from some twenty cities across the country who traveled to Washington, D.C. last January to confront Education Secretary Arne Duncan. Duncan has made the policy involvement of philanthropists a hallmark of his administration. The protesters condemned ed reforms they consider discriminatory, especially closing neighborhood schools or turning them over to private contractors. They filed several Title VI civil right complaints on the grounds that shutting down large numbers of public schools adversely and disproportionately affects minority children. Although most decisions to close schools are made locally, the federal Education Department promotes the policy through its Race to the Top and School Improvement Grant programs (see here and here).

Philanthro-ed-reformers have been chanting the mantra “Education is the civil rights issue of our time” for years, and they’ve appointed themselves leaders of the reform movement. The largest stakeholders in public education—students, educators, and parents—have no role to play except as recipients of donor-designed reforms. When they question the charitable largesse, they become part of the opposition that the philanthropists shall overcome. They shall overcome, not we. Solidarity doesn’t figure in.

Joanne Barkan is a writer based in New York City and Truro, Massachusetts. For the past six years, her work has focused on the relationship between “big philanthropy” and democracy, and the intervention of private foundations in public-education policy.