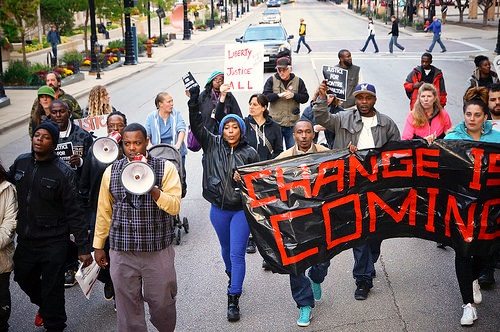 Increasingly, some outlets are using longer-form journalism to bring their readers or listeners more deeply into an issue. This American Life is one of those outlets, despite the recent kerfuffle about its journalistic chops.

As outgoing Attorney General Eric Holder spends his last few weeks in office speaking to civilians about community relations with their local police departments, the issue is also taking center stage in a new podcast series by This American Life, a weekly radio program recently popularized by the true crime podcast, Serial.

Narrated by Brian Reed, the new two-part series, “Cops See It Differently,” was launched online last Friday and delves into the contentious relations between police departments and their communities, particularly minority communities. It’s an issue that erupted into public discourse last year following the deaths of Eric Garner and Michael Brown, leading to the Black Lives Matter movement.

This first part of the series focuses on the police department in Milwaukee, Wisconsin, and ardent, good-intentioned police chief Ed Flynn in particular. By the time he came into the position back in 2008, there were already deep-seated tensions underlying community and police relations in Milwaukee, a city with a great racial divide.

The episode takes listeners through some of the Milwaukee department’s more controversial policing moments, such as the death of 22-year-old Derrick Williams, who died in the back of a squad car after telling officers, “I can’t breathe.” (That’s right; Milwaukee had its own Eric Garner three years before the Staten Island case.) The episode also looks into the aftermath of the police shooting death of mentally ill Dontre Hamilton, which resulted in the firing of the officer and a heated town hall meeting that was frustrating for both the community and police department.

But it’s the prologue of the series that provides the most succinct depiction of how many minorities feel about local police officers. Back in September, Lisa Mahone of Hammond, Indiana, her two children, and her friend Jamal Jones were pulled over for a routine traffic stop that escalated to police officers pulling their guns and demanding Mahone step out of the car. Fearing for her life, Mahone called 911—on the police officers.

In many ways, after listening to the podcast, Ira Glass and Brian Reed have not shown us much we don’t already know about the situations in these communities. Those being targeted are males from minority groups, African American or Hispanic. However, what’s interesting about the podcast is that it gives the much-less-covered perspective of the police officers on the other side.

In the case of Derrick Williams, as an example, we see two very different perspectives of the video camera that caught him gasping for breath and dying in the back of a police squad car. Watching the video, Williams can be heard pleading with officers to help him while he is repeatedly told to stop “playing games” or ignored entirely. Later, we see Williams slump down in the backseat. Only then does a police officer come to check on Williams and see if he was okay. He wasn’t.

A civilian watching the video would wonder why a police officer did not help Williams. Is it because the officers did not take him seriously? Was it some sort of subconscious racism that some officers may have, as will be discussed by the podcast next week?

Watching the video, Chief Flynn had a very different perspective:

“Our first thought when that tape was finished was breathing a sigh of relief. ‘Well, gosh, the cops didn’t do anything to him.’ And of course, what we’re completely missing is that the average person seeing that tape is perceiving absolutely uncaring, unfeeling officers who refused to do anything about a man in distress. And we missed it.”

Instead, Chief Flynn focuses on the disconnect between how the public perceives and understands a police officer’s world and an officer’s reactions to crisis situations:

“In hindsight, one recognizes it’s difficult to explain the universe of police officers in crisis situations and how often an average officer encounters an arrested suspect that doesn’t want to go to jail and wants to go to the hospital.”

After the 22-year-old’s death, Chief Flynn made it mandatory for officers to automatically call an ambulance upon hearing an arrested suspect needs medical attention. In so doing, the decision of whether a suspect needs attention is officially out of a police officer’s hands.

And then TAL asks the big question, the question you need to ask upon seeing officers ignore a man’s pleas for help time and time again in these videos: Is there a problem with police officers lacking empathy? Here, Chief Flynn talks about how dealing with the social ills of our society day and day out has an enormous effect on officers. “They harden themselves,” he says.

We need this perspective because the public needs to know exactly what about police brutality needs protesting. We need to understand the constraints police officers are under so we can figure out how to prevent more Eric Garners, Michael Browns, Derrick Williamses and Dontre Hamiltons. The emotions we hear from Chief Flynn in this podcast confirms that both sides want the same outcome, but we are nowhere closer to reaching it.

Where and how does race play a role in police officers’ decision-making? “Next time, on This American Life…”—Shafaq Hasan