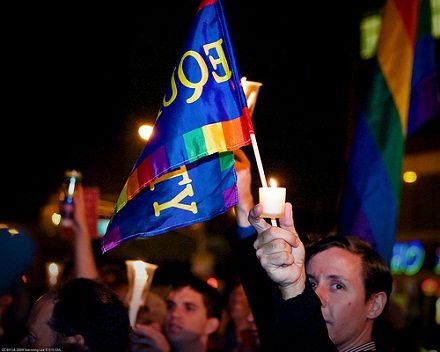 Election Day 2012 marked a major step forward for marriage equality. The issue won at the ballot box in four states (three of which legalized it): Maine, Maryland, Minnesota, and Washington. Before this election, the issue was zero for 32 in previous elections. According to an editorial in the Baltimore Sun, this could be a watershed moment for civil rights. The paper’s editors credit the support of President Barack Obama as well as the NAACP for helping marriage equality to pass in Maryland. Gay marriages will start in the state of Washington in next month. In Minnesota, gay marriage is still illegal, but the vote there nixed a constitutional amendment that would have banned same-sex marriage. Maine’s vote was a reversal of voters’ position on the issue just two years ago.

A Huffington Post column by Chad Griffin of the Human Rights Campaign explores what made a difference this year. Among the factors Griffin lists were the support of President Obama, the arrival of the next generation of young voters, and a change in the partisan lines on this issue as young Republicans supported marriage equality along with young Democrats. Also, businesses such as Amazon, Starbucks and Nike stepped up their support as well. Griffin argues that public opinion has changed and that 16 national polls this year found that a majority of Americans now favor marriage equality. Money also mattered, as national opponents to gay marriage reportedly spent less money this year than in the past. Additionally, some faith-based coalitions openly supported gay marriage this time.

Writing for TIME, Michael A. Lindenberger sees the state wins as part of a sweeping change that also included the election of Rep. Tammy Baldwin (D-Wisc.), who will become the first openly lesbian member of the U.S. Senate. “This is what a tipping point looks like,” according to Nan Hunter, who studies LGBT rights at the Georgetown University Law Center. Meanwhile, in a statement from the U.S. Conference of Bishops, Archbishop Salvatore Cordileone of San Francisco said, “November 6…was a disappointing day for marriage, as the effort to preserve the unique meaning of marriage in the law lost by only a narrow margin in four states, even though vastly outspent by those who promote the redefinition of marriage…The meaning of marriage, though, cannot be redefined…”

Federal government benefits, such as those related to tax status, still will not apply to LGBT couples in these states. However, the timing of the new marriage equality laws could be crucial, as the Supreme Court may soon be considering the Defense of Marriage Act. –Jeanne Allen