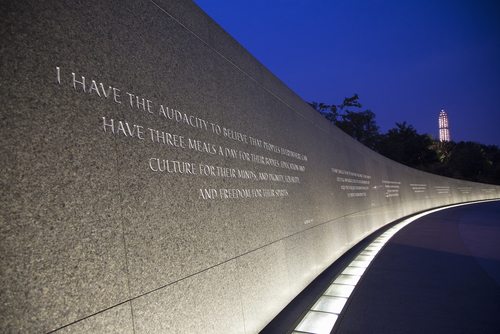 Once again, the nation’s plans for celebrating Martin Luther King, Jr. Day tend toward the anodyne volunteerism projects that have been the bread and butter of past and present White Houses since the advent of the holiday in 1983. Such fare has always evinced a terrible myopia about the meaning and memory of Dr. King. This year, in the wake of a litany of race-related issues including police killings of unarmed black men in New York and Missouri, vigilante killings of black teens in Florida, retrenchment in key elements of the nation’s civil rights history regarding voting rights for persons of color, and increasing gaps between whites and blacks across a number of issues such as wages, health, and education, the “volunteer day” approach to celebrating Martin Luther King, Jr. Day sells Dr. King and the nation’s racial troubles tragically short.

On the website of the Corporation for National and Community Service, where the administration’s MLK Day events have resided for several years, you are asked to take an MLK Day pledge:

“To celebrate the life of Dr. Martin Luther King, Jr. this year, take the MLK Day Challenge by making a commitment to serve not just on one day, but throughout the year…to make your community—and the country—a better place.”

The suggested MLK Day projects are all worthwhile, but they could have been attached to the name of any nationally respected figure who believed in and supported voluntary action, not just Dr. King: community disaster planning, organizing clothing drives, supporting food banks, teaching financial literacy, promoting the Earned Income Tax Credit, reading with children, organizing a book drive, STEM mentoring, planting trees in neighborhoods, supporting community gardens, organizing fitness events and walking teams, and supporting veterans. All good, all worthwhile, but nothing that reads like specifically addressing racial crises that have come to public consciousness (though they were there all along for African Americans) during the past year.

In Athens, Georgia, for example, the first 200 people showing up at the local MLK Day of Service breakfast will get a free t-shirt as they march off to service projects at elementary schools, community centers, and cemeteries. In Norristown, Pennsylvania, the MLK Day of Service events are being coordinated by the Greater Norristown Police Athletic League, expecting 800 volunteers to do projects at the zoo, the public library, a theater, a church, and a community center. These small volunteer projects will be mirrored more or less in communities around the nation and celebrated by the White House as President Obama and his family also engage in service activities (last year, the president showed up at D.C. Central Kitchen while Vice President Biden appeared at So Others Might Eat). The focus on service projects to honor Dr. King’s life emanates from his oft-repeated quote, “Life’s most persistent and urgent question is: ‘What are you doing for others?’”

This year, it might be more appropriate to address the questions of race that in their life-and-death seriousness have made a lie of the pipedream that the nation has crossed a historic divide and become a “post-racial society.” The election of a black president did not make the issue of race a remnant of the 1960s civil rights era. As the New York Times noted last month, the president himself is conflicted—and being tested—about what do and how hard to push regarding the changes he knows are needed in the way the nation treats people of color.

This year, a different kind of MLK Day commemoration is needed. At Bates College in Lewiston, Maine, faculty and students will learn about and debate the meaning of MLK Day in light of events in Ferguson (the Michael Brown killing), Staten Island (the Eric Garner killing), and around the world, including issues regarding the treatment of Palestinians. In Baltimore, the Reginald F. Lewis Museum of Maryland African American History & Culture will hold workshops on the civil rights movement’s meaning and legacy for today, including a capstone event including city officials, university faculty, and youth organizers on how to continue the organizing work sparked by the protests in Ferguson. Several days of programs and events on voting rights, poverty, segregation, and immigration will be held at Vanderbilt University, with such participants as Harry Belafonte (on voting rights), Andrew Young, and our personal friend Andy Imparato of the Association of University Centers on Disabilities (on the civil rights of persons with disabilities).

Dr. King would have wanted to see a post-racial society, but it wasn’t to be in his lifetime and it isn’t now. Dr. Gail Christopher of the W.K. Kellogg Foundation defines the problem clearly:

“What’s good about the phrase ‘post-racial society’ is that it’s aspirational. It suggests that there is something in the heart and minds of most people that we should not be blinded by color or the fallacy of racial difference. That’s the key. This idea of racial difference is not grounded in science. The human genome and evidence tells us that there is more difference within the races than between the races. So this whole notion about racial differences is a fallacy. It has to be acknowledged that our society has been built on that fallacy. People of color are not proportionately represented in leadership roles of government or private industry. And wealth is so unevenly distributed in this nation. So all of this ties back into the institutionalization and internalization of this fallacy not only of racial difference but racial hierarchy. We have to pull the covers off and say this is as crazy as people believing the world was flat.”

Just last week, the news came down that the number-three ranking Republican in the House of Representatives, Majority Whip Steve Scalise (R-LA), gave a speech to the European-American Unity and Rights Organization founded by former Ku Klux Klan grand wizard David Duke. Scalise claimed not to know that this was a white supremacist organization despite its obvious name and Duke patronage (both Scalise and Duke are Louisianans). When the nation gives racism a pass, as with Scalise’s EURO speech, it is crystal clear that the U.S. is far from post-racial.

This year, more than any in recent times, the onus on all of us should be to take back Martin Luther King Day from the emphasis on top-down, one-day, feel-good volunteer fix-up projects and refocus attention on strategies and actions to address racial inequity and injustice today. In 2009, Attorney General Eric Holder said, “Though this nation has proudly thought of itself as an ethnic melting pot, in things racial we have always been and I believe continue to be, in too many ways, essentially a nation of cowards.” In 2015, we should all be showing courage to analyze, address, and attack overt, structural, institutional, and implicit racism on the day on which we all too often miss the point of Dr. Martin Luther King, Jr.’s life and legacy by making his holiday one that doesn’t forthrightly address issues of race.—Rick Cohen