Too Dismal For Dismaland: Palestinian Artist Booted from Banksy’s Park 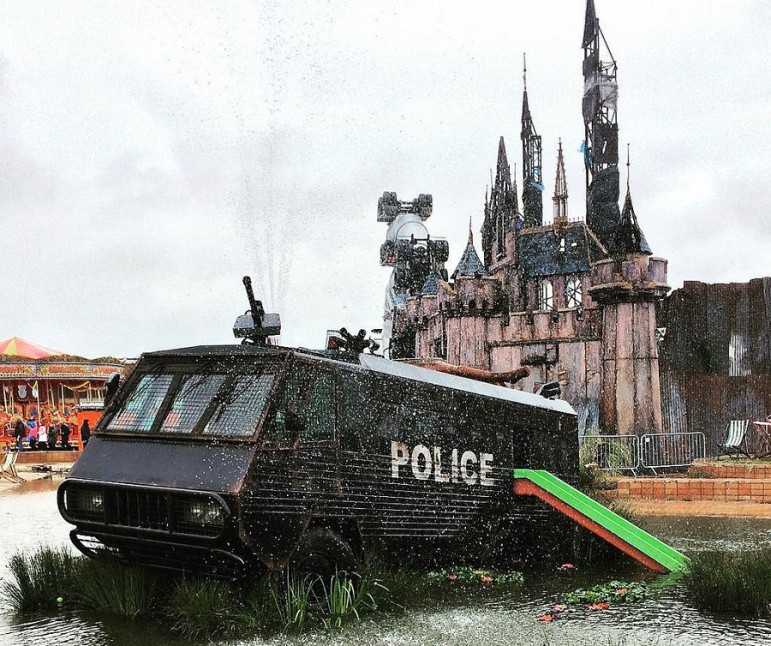 Evidently, artistic social commentary has its limits at Banksy’s Dismaland, the dystopian “bemusement park” that opened in Weston-super-Mare, England, this past weekend. Following an impromptu demonstration against the inclusion of Israel artists in the show, Shadi Alzaqzouq, 34, a painter of Palestinian descent, was thrown out of the anti-theme park.

Alzaqzouq’s demonstration, according to the Jewish Chronicle, was over three Israeli artists taking part in the show, “one of whom one served in the Israel Defense Forces.” Alzaqzouq told al-Araby al-Jadeed that his complaints to organizers of the exhibition went unheard and that he was not notified of the Israeli artists’ involvement in the exhibition.

The Independent’s Chris Green reported that Alzaqzouq covered his two paintings with bed sheets that read “R.I.P. Gaza: Boycott Israel” and lay down “like a corpse” in front of his work.

After half an hour of protest, security guards called Holly Cushing, who is purportedly Banksy’s manager. Alzaqzouq said Cushing told him his protest was too “ugly” for the show and he was subsequently escorted out of Dismaland. Despite Alzaqzouq’s removal and ban from the grounds, his work is still on display.—Kathleen Ebbitt