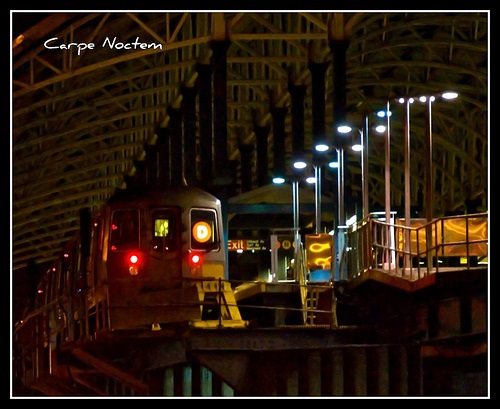 What better way to introduce a community, residents and travelers alike, to public art than through the public transportation system? That is exactly what Brooklyn, New York, is doing through the Arts and Design program of the Metropolitan Transportation Authority (MTA). Twelve of the fourteen stations in Brooklyn on the D train line are slated to have public art of some kind, spanning a range of topics and media that includes mosaic proletarians, cast bronze bees, and a 20-foot-long translucent hot dog. This particular public art program is facilitated through a rehabilitation budget for subway and rail stations, which included $88 million in renovations to seven of the stations in 2012.

The public art in Brooklyn brings a whole new meaning to “art is for everyone.” By placing public art in the arena of public transportation, access to art is no longer restricted to museums or other places that serve as “gatekeepers.” It is literally right in front of you, for consumption 24/7.

The MTA Arts and Design program prides itself on being fluid and ever changing. It’s no wonder that the program wanted to use the public transit system as a way to travel this moving museum. Public art is now seen as an economic driver for communities. Residents and visitors are attracted to places and spaces with unique and beautiful works that complement an area or region.

What is interesting is the transformation of what public art means to the general public. Where the traditional image of publicly supported public art might once have been statues of historical figures outside a local museum, in today’s fast-changing, interactive environment, residents and tourists are seeking more. Public art now pops up in untraditional spaces, like subways and general gathering areas of a city. According to Robert Lynch, President and CEO of Americans for the Arts, “Today, public art takes on a wide range of forms, sizes as well as scales and can be temporary or permanent. Public art includes murals, sculpture, memorials, integrated architectural or landscape architectural work, community art, digital new media and even performances as well as festivals.”

Public art is no longer just for decoration; it is for discussion, thought, and identity. People use it to identify the places they’ve travelled or to demonstrate the uniqueness of their hometown. To some extent, it’s become a benchmark for achievement.

What public art says about who we are, or what kind of city or region we are in, is now taken into account when developing, redeveloping, or adding to a place, bringing art into a larger discussion well beyond “quality of life” or “making people feel good.” What is for certain is the attention and attraction public art gives to communities that once were only brick and mortar buildings. Developers, planners, artists and residents alike are using cities and towns as their canvases.—Jennifer Swan