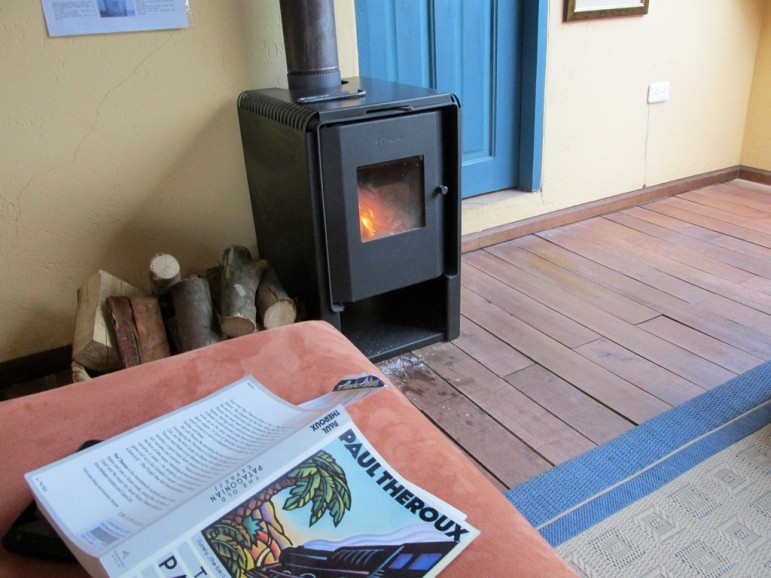 Hooray for Paul Theroux, who, as he toured the rural South, found the community desolation that some of us have long seen and known and realized that the sentiments and programs of corporate moguls to lift the poor out of poverty are often so much palaver. Much of his argument was against the export of American jobs to other nations, reflecting the much greater mobility of capital than labor in the global economy. In Nike’s move of almost all of its manufacturing overseas, it has impoverished American communities under the fiction that in doing so, Nike’s Phil Knight was motivated to lift the developing countries’ poor out of poverty, helped along by the even greater fiction that Americans wouldn’t jump at the opportunity to be employed in factories making Nike shoes stateside rather than watching their unemployment benefits run out and their communities decline.

Given less prominence in his piece was his eviscerating critique of the likes of Phil Knight at Nike and Tim Cook at Apple (on Nike’s board) that the charity of these moguls will somehow uplift the poor. Hooray, again, for Theroux, calling out the hypocrisy behind the congratulatory humanitarian accolades America’s enlightened corporate intelligentsia awards to itself. The notion that the exploitation and devastation wrought by corporate profit-seeking is mean to uplift the poor is hard to swallow whole when one takes into account the total picture of the billionaires’ income amounts, sources, and impacts.

As Theroux put it, “The strategy of getting rich on cheap labor in foreign countries while offering a sop to America’s poor with charity seems to me a wicked form of indirection. If these wealthy chief executives are such visionaries, why don’t they understand the simple fact that what people want is not a handout along with the uplift ditty but a decent job?”

Like some foundation execs who sit atop erstwhile progressive grantmaking machines, these mega-donors and mega-grantmakers attempt, we presume, to make the economic system that generates their economic growth work for everyone. In reality, under current dynamics of charity and philanthropy they are falling pretty short from making the economy work for everyone. For the most part, they sit on their assets, distributing in the realm of five percent, and watch their corpuses grow while the assets of the small towns in the Mississippi Delta and the Alabama Black Belt shrink—and the poverty of their residents grows. Even within their frame of operating within the current economic system, they could be doing much more.

No one should suggest that the big foundations are not frequently undertaking good works in their missions, albeit swathed of late in the language of social justice. They are doing some laudable things with their grantmaking, and a few through their PRIs and MRIs. No one should be fooled, however; philanthropy as a whole engages in good works only to smooth some of the roughest edges of the economic system, making capitalism a little easier, a little more comfortable for those not well served by the profits of Nike, Apple, and their peers. Philanthropy doesn’t typically aim to overturn the economic system that creates and sustains it.

What, then, would foundations have to do to do something that is more than merely reformist? What should they be prepared to do that approaches the concept of “non-reformist reform,” the memorable phrase of labor economist André Gorz to mean actions that can be undertaken within the strictures of contemporary economy and politics, but in the course of doing so, change the nature of the political or economic systems themselves?

It is a strategy that has been employed by conservative funders, for example, in their grant support for charter schools and vouchers for private schools. In promoting and mounting school choice programs within the boundaries of public education, they have proceeded to offer an approvable institutional model of education that limits transparency and disclosure, undermines union protections for professionally trained teachers, and alters the financial picture for traditional public schools. Nonetheless, it is a strategy of structural change, as Gorz would have it, which gets implemented within current structures.

That strategy, if foundations were real about their commitment to social change, would also include much higher levels of payout. Recently, some advocates have asked climate change funders for a one-time increase in their payout to 10 percent— warranted, they argue, because of the impending doom in our society due to manmade global warming. They are right, but limited. Why ask for a one-time payout increase? There is little justification for foundations to sit on their 95 percent other than their interest in maintaining and growing their institutions. Philanthropy could easily adopt much higher payouts than the typical five percent. It would eventually eat away at the endowments of current institutions, but those philanthropic assets would be replaced by the influx of new moneys into philanthropy and by living donors attached to current foundations.

Assume in any case that philanthropy were to be stuck with no inflow of new funding from people establishing new foundations or expanding existing ones. In which century would some of the multibillion-dollar foundations spend down if they were routinely paying out at 10 percent, rather than engaging in a one-time increase?

If foundations were really about to change the equation for the Black Belt and Delta towns that Theroux visited, they would be funding the organizations that are the mechanisms for the people in those communities to speak for themselves, engage the Nikes and Apples and other corporations of power, and advocate for the societal changes that they themselves can plan and shape. Those towns that Theroux toured aren’t simply poor in economic terms; they are under-resourced and ill equipped to make their case with the moguls who run the economy and philanthropy. Our nation hasn’t just shortchanged its communities in economic terms. It has reduced their democratic voice. Our democracy deficit is as serious as our trade deficit.

Theroux’s analysis is taking its lumps, such as a critique from Tim Worstall at Forbes who doesn’t buy into Theroux’s tendency toward overstatement, such as comparing the poverty in some Southern places to towns in Zimbabwe. We wouldn’t make that comparison either, but we wouldn’t suggest that Hollandale, Mississippi, is some sort of poverty-stricken exception to a U.S. narrative of societal progress. Having done tours of the Delta similar to Theroux’s, though not in the Black Belt, we have seen many devastated communities with living conditions that do recall for us, like Theroux, the Depression-era writing of James Agee and the photography of Walker Evans.

Theroux’s analysis in the New York Times is not an academic treatise, but an evocation of a societal dynamic as seen through the eyes of an experienced traveler and visitor. It’s what a good travel writer does, digging beneath the statistical data and the surface conditions to discover what a community is really like. Theroux seems to have accomplished just that, with an overlay of disgust over the sop of charity.—Rick Cohen