Trials and Tribulations in the World of Teach for America 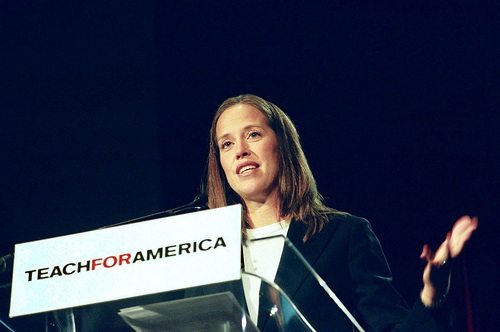 Earlier this month, Teach for America was crowing about a controversial Mathematica study that suggested that TFA teachers were, at least in mathematics, more successful teachers than traditionally trained teachers and even other alternative teaching programs. Nonetheless, the pushback against TFA seems to be continuing.

In the Atlantic, a former TFA teacher recounted the inadequacy of her five weeks of training for handing a classroom of unruly elementary school kids. Her critique of her TFA training and subsequent TFA support and TFA pressure is pretty scalding, but what was most striking were her citations of TFA materials that characterized pupils’ pre-TFA experiences as simply having not being taught. The slams on public school teachers in the TFA canon, despite public statements to the contrary, are off-putting, especially when the author, Olivia Blanchard, describes the so-called “uncommon” TFA teaching techniques—“setting high academic expectations, structuring and delivering your lessons, engaging students in your lessons, communicating high behavioral expectations, and building character and trust”—as pretty much anything but uncommon.

Writing for the student newspaper at Tufts University, recent Tufts graduate Benjamin Cohen (no relation) sharply questioned the “celebratory” nature of a column describing Tufts’ role as a pipeline for TFA teachers. Summarizing an emerging line of articles much like Blanchard’s, Cohen writes, “Over the last few months a number of TFA veterans have published harsh diatribes against their former employer. These accounts condemn the organization for its lack of professional development and support, the antipathy it has fueled between corps members and established teachers and the basic claim that TFA hurts young students by placing rookie teachers in environments that require experts. TFA is a powerful corporation, but slowly voices are piercing through the silence to question the organization’s practices and philosophies.”

Perhaps the most intriguing discussion of TFA emerged from a meeting of the Congressional Black Caucus. Writing for The Grio, Andre Perry described a meeting of black TFA teachers at the annual legislative meeting of the Congressional Black Caucus Foundation, noting that 75 percent of all TFA teachers are white or Asian, while the demographics of their student populations are much different. Perry writes, “teachers of color generally are more culturally competent; have higher expectations around a range of life outcomes; provide explicit role models and establish the numeric diversity required for higher levels of equity. In addition, a predominately white faculty and staff reveal implicit biases of who should teach and who should not.”

Tell us your experience on the inside of the Teach for America machine.—Rick Cohen