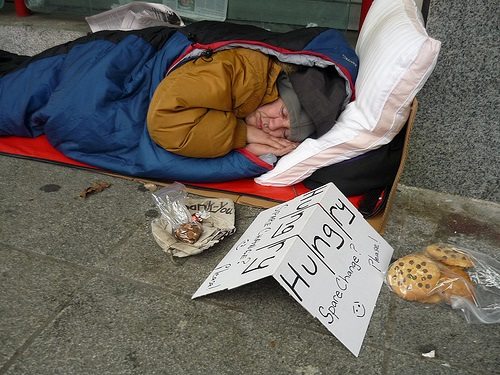 This past week, two pastors and a 90-year-old man were charged by Fort Lauderdale police for violating a new city ordinance banning public food sharing. Arnold Abbott, 90, was the first to be charged. Having run a nonprofit that has been feeding the homeless in Fort Lauderdale for over 20 years, Abbott has faced obstacles to his mission from the city before. In 1999, Abbott won a lawsuit against the city after restrictions against feeding the homeless on Fort Lauderdale Beach were announced. And legal action might be needed again, as Abbott and the local pastors face up to 60 days in jail and a $500 fine for their charitable work.

In 2012, NPQ covered a similar situation concerning food sharing in Philadelphia. Before that, in 2011, it was Food not Bombs in an Orlando park. And according to surveys found in the October 2014 report from the National Coalition for the Homeless, “Share No More,” 12 cities, in addition to Ft. Lauderdale and Philadelphia, passed property use restrictions for feeding the homeless in 2013-2014. Such ordinances block the use of public space in terms of public food sharing, claiming that providing food to people experiencing homelessness causes traffic congestion and an increase in littering. Other cities cite food safety among the reasoning behind their anti-food sharing regulation. As such, nonprofits and others looking to distribute food in these cities often need to obtain a variety of special permits—a process that can be costly and time consuming for smaller organizations and individuals.

Such criminalization of the homeless and of people offering assistance is being fought by organizations like the National Coalition for the Homeless, the United States Interagency Council on Homelessness, and the National Law Center on Homelessness & Poverty. Claiming that regulations and restrictions on the homeless and their supports are not only ineffective and cost-inefficient as policy but also inhumane, advocacy against such marginalization of the homeless is reaching international levels. In November, the National Law Center on Homelessness & Poverty will ask the U.N. Committee Against Torture to review the U.S.’s human rights treaty commitments to rule that the criminalization violates our country’s human rights obligations. Such rights include the right to food, as confirmed by the UN Committee on Economic, Social and Cultural Rights in 1999, the Commission on Human Rights in 2000 and the United Nations Organization for Food and Agriculture in 2003.

By ending criminalization, efforts can be put into policies that help the individuals who are suffering from homelessness achieve success rather than penalizing them for their human needs. Such goals can only be achieved through resolving the causes of homelessness – not by banning support services to those that need them.—Michele Bittner

Touching the Hearts of Possible Donors and Volunteers—Just...