Unions and the Nonprofit Workforce: A Few Considerations 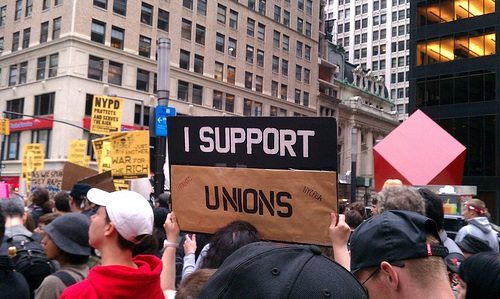 There are few topics in the nonprofit sector likely to create as much discomfort as the idea that nonprofits should be unionized. While union organizing has been pretty longstanding at colleges, universities, and hospitals, the rest of the nonprofit sector doesn’t typically welcome the notion of unionization. Commenting on the union negotiations of orchestras, theater and film expert Diane Ragsdale wrote last year, “To be honest, it’s hard for me to even reconcile the need for and validity of unions and hardball negotiations with a nonprofit ethic.” Over the years, there have been occasional reports of nonprofits handling union organizing efforts with less grace and aplomb than one might suspect of nonprofit CEOs with the “nonprofit ethic” that Ragsdale described in her blog post, including well-publicized charges of union busting at the Los Angeles office of Greenpeace and in the Pacifica Foundation network of radio stations. In general, however, union organizing efforts at nonprofits smaller than universities and hospitals are a bit rare.

In 2010, the employees of the nonprofit Larkin Street Youth Services, a homeless-services nonprofit, tried to organize a union, but failed. This year, they tried again, looking for a union affiliation to help them deal with issues such as understaffing, increased workloads, and cuts in their benefits. The vote count in the union election was overwhelmingly in favor of joining SEIU 1021. In San Francisco, unionized nonprofits include La Clínica de La Raza, the Exploratorium, and others that one wouldn’t necessarily think of as in the unionized university/hospital nonprofit class. Writing for the East Bay Express, Corey Hill says that the San Francisco Bay Area has the third highest number of unionized nonprofits, behind only New York City and the District of Columbia.

Is there going to be more attention directed toward unionizing nonprofit shops? Hill suggests that the declining union membership in the private sector and the privatization of unionized government functions to non-union vendors and service providers will draw attention to the roles of nonprofits. If government functions, delivered by a typically highly unionized workforce, are outsourced to a much less unionized sector—Hill says only six percent of nonprofit employees are unionized—that will show up in declining public sector union membership and increased attention from organized labor. The author suggests that because of the mission-driven nature of much of the nonprofit sector, “nonprofit management sometimes takes advantage of employees’ desire to do good, and guilt-trips them into working long hours for low pay.”

Some union organizers don’t believe that bringing unions into nonprofit workplaces has to be all that contentious and adversarial. Maria Figueroa, director of Labor and Policy Research at Cornell University’s School of Industrial and Labor Relations, cited examples of labor-management partnerships, such as the agreements between 1199 Healthcare Union/SEIU and voluntary hospitals in New York City and between unions and Kaiser Permanente as alternatives to us-versus-them scenarios. However, hospitals, which often look and behave like for-profit employers, are quite different from other nonprofits. Kaiser itself is hardly a typical nonprofit. Although we have seen estimates of its total employment (including doctors) as high as 181,000, the website for the Kaiser Permanente Labor Management Partnership says that it covers 90,000 K-P employees, plus 20,000 managers and 16,000 physicians in nine states and Washington, D.C.—larger numbers than the vast majority of nonprofit firms.

In the end, nonprofits often want to be recognized and treated as employers. For the 12 to 15 million people who work for nonprofits, a union doesn’t necessarily mean that they cannot identify as mission-committed workers, but they can make sure that as employees, their rights and needs are respected in a formal way, rather than having a nonprofit CEO (or CEO and the board) make decisions unilaterally without substantive employee input.

In a retrospective on her experience as a shop steward at a very small community organizing nonprofit during an economic downturn, Emma Shulman wrote, “Through the union, we were able to have the difficult conversations about work expectations in a formal environment. We were able to strengthen our contract through benefits in a difficult time. We accepted an across the board wage reduction rather than one staff member being laid off. We were able to respond as a collective asserting our collective needs rather than as individuals….A worker who is treated better does better work. And, I was in the trenches with my co-workers before, but struggling with them through the contract negotiations built strong bonds amongst us as the workplace and helped for us to think of ourselves as non-profit workers that can assert our needs. The road is long, but we should all be treated with dignity, respect, and protections as we do beautiful organizing work.” –Rick Cohen