Unions Lament Mich. “Right to Work” Law; What Impact Will It Have? 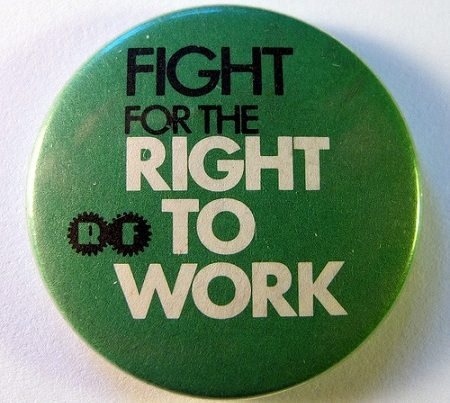 After a bitter debate that shows no sign of stopping, yesterday Michigan Gov. Rick Snyder (R) signed two bills that made Michigan the 24th state to enact a “right to work” law. It is noteworthy that Michigan, long a strong bastion of organized labor, is the first so-called “blue” state to do so. “Right to work” allows workers to join unions without having to pay union dues as part of their terms of employment.

Appearing on “The Mike Huckabee Show,” Snyder contended that the laws shouldn’t have much impact on unions who are demonstrating their value to members. “…This should make them more responsive, because it really means that they have to be listening to workers more attentively and really presenting the value proposition to them,” Snyder said. “Because if they were doing all the things that workers were looking for, there shouldn’t be any difference with this legislation at all. Workers would simply choose to join the union, versus not choosing.”

Union leaders see it differently. United Auto Workers President Bob King told Politico, “I’m worried about the impact on society…They’re attacking everything that is good for working families.” AFL-CIO Union President Richard Trumka issued a statement calling attention to the concerns of protesters who surrounded the Capitol Building Michigan: “The people in the Capitol and around the state are demanding that legislators focus on an agenda that puts families and communities first, yet these Republican legislators and Gov. Rick Snyder and willing to put politics ahead of Michigan’s well-being.”

While the debate over the impact of “right to work” rages on, it is clear that, unless the law is repealed, unions will likely need to increase their organizing efforts in Michigan and direct more resources toward targeting potential Michigan members for their support (as they have in other “right to work” states, such as Nevada). At the same time, it will be interesting to see whether the passage of “right to work” in a “blue” state with a history of a strong labor presence may have unintended consequences, perhaps yielding more involved union members in Michigan. After all, a perceived threat to an organization’s existence often acts as a catalyst to engage constituents more actively. –Mike Keefe-Feldman