Up to 80,000 March in Streets of Dublin for Water Rights 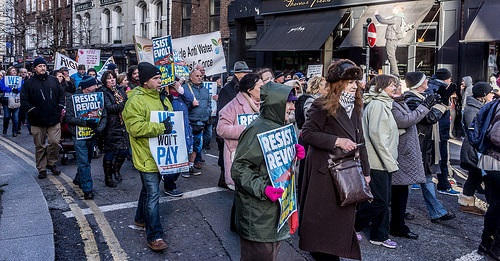 Some of the between thirty and eighty thousand people (depending on the source of the estimation) marching in the streets of Dublin Saturday waved Greek flags in a gesture of solidarity with those hit hard by austerity measures there. Indeed, there was an undercurrent present of the uneven nature of the recovery in Ireland (as in the U.S.) but this demonstration was specifically focused on the government’s scheme to begin to charge residents for water. It was the fourth large demonstration on the issue since October.

Independent TD Thomas Pringle, along with others, urged the Right2Water crowd not to pay their bills. “On April 1st, tell your friends, your neighbors and your colleagues to bin their bills and bin every one that comes after it because right is on our side and we will win this battle.”

Others, including Stephen Fitzpatrick of the Communications Workers Union, called for the ownership of water to be protected in the Constitution. “That’s all we want, we already own it, protect it,” Mr. Fitzpatrick added, to applause.—Ruth McCambridge