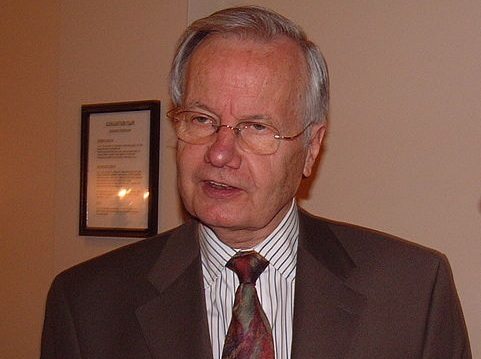 There are many of us scribblers and commentators who wish just for a moment we could speak and write with the quality of Bill Moyers. Before becoming a fixture on public television, the 77-year-old broadcast journalist was a founding organizer and deputy director of the Peace Corps, a special assistant to LBJ, publisher of Newsday, and later a correspondent and news analyst for CBS News. He is a fabulous essayist, as exemplified by his July 6, 2012 essay, “The Cowardly Lions of ‘Free Speech.’” You can watch it here:

It is a telling dissection of what he calls the “odious” Citizens United decision of the Supreme Court regarding unlimited secret political funding. Citing a Weekly Standard commentary by Fred Barnes that credits the Republican super PACs for their successful attacks against incumbent Sen. Claire McCaskill (D-Mo.), Moyers suggests that Barnes’s candor essentially “expos(es) the hoax that the Court’s original decision was about ‘free’ speech.” He simply devastates the argument of conservatives—and others like constitutional lawyer Floyd Abrams—that the Citizens United decision promotes free speech:

“Free speech, my foot,” Moyers says. “It’s about carpet bombing elections with all the tonnage your rich paymasters want to buy…Poor people haven’t lost their voice. They can’t afford a voice. And everyday working people? Universal laryngitis—the chronic absence of money. As for children—children who have a big stake in our elections but no vote—for them to be heard they would need piggy banks the size of Walmart heirs or the Koch brothers for uncles.”

Then Moyers demolishes the argument made by big moneyed interests for the secrecy of their donations to political committees:

“(I)f ‘free speech’ is a right, why all the secrecy? Why hide from voters where the money is coming from? Why not openly say you’re downright proud to be exercising your First Amendment rights and that writing checks is your patriotic duty? Instead, conservatives across the country are fighting to keep their sugar daddies secret…(T)he editorial page of The Wall Street Journal asks us to have pity on billionaires and those little ol’ corporations and their CEOs who just might have their tender feelings hurt—if they were exposed to boycotts and pickets—were it known which candidates they were buying. Wait a minute. Weren’t we taught the First Amendment also guarantees the right of every citizen to assemble and petition, even to boycott and picket?”

Here’s the cowardly lion part: “Let’s see if we’ve got this right: On the one hand, conservatives declare that corporations and the superrich can spend all they want on exercising their First Amendment rights, but on the other, they demand to keep it secret so the rest of us can’t exercise our First Amendment rights to fight back? Have you ever heard of more cowardly lions?”

It’s not just that Moyers knows how to write. He knows how to tell the truth about our electoral campaigns and some of the 501(c)(4) organizations that masquerade as contributors to the social welfare of our society.—Rick Cohen