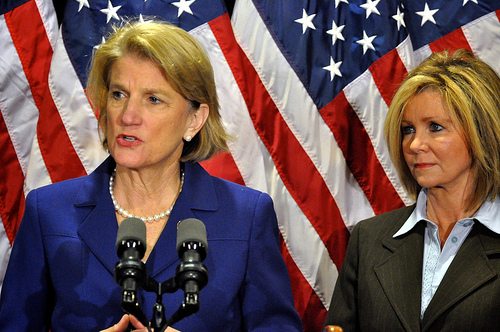 Things are looking up for the reauthorization of the Violence Against Women Act (VAWA). The measure passed the Senate a few days ago, albeit with opposition from 22 Republicans, and is due to be taken up in the Republican-controlled House but it may be that women’s activism and the Republican urge to counter their “war on women” image in the last election has paved the way for a favorable review. Writing for The Hill, Alexandra Jaffe suggests that some representatives are signaling their support.

Republican Reps. Shelley Moore Capito (W.Va.) and Charlie Dent (Pa.) both told The Hill that they would back the Senate bill as passed. And Rep. Pat Meehan (R-Pa.) said he’s open to the bill as well, despite qualms about a controversial plank concerning jurisdiction over tribal lands. According to Capito, “It is far, far past due to reauthorize VAWA. The Senate version of VAWA achieves the main purpose — helping protect women who are victims of domestic abuse — and for that reason, I would support it if the House decides to bring it up.”

Nationally, exit polls indicated that 55 percent of women voted for House Democratic candidates while 45 percent voting Republican – a gender gap similar to the one that played out in the presidential election. For Capito and other Republicans facing serious democratic opposition, VAWA is a critical vote. In fact, a group of House Republicans who The Hill says will be vulnerable going into 2014 reportedly communicated by letter with House leadership this week, advocating VAWA’s passage.

There is no doubt that the threat of a worsening GOP image among women looms large in the background of this decision. Jennifer Lawless, head of the Women and Politics Institute at American University, told The Hill, “If Republicans are serious about trying to be more inclusive, not only regarding race and ethnicity but also concerning gender, this seems to be a non-controversial step that they could take.”

For the first time since its passage in 1994, the Violence Against Women Act reauthorization failed last year. Opponents of the bill cited concerns with protections for lesbian, gay, bisexual, transgender and queer/questioning individuals (LGBTQ), undocumented immigrants, and Native American women on tribal lands.

A woman’s work is never done but once in a while maybe we can catch some momentum? –Ruth McCambridge