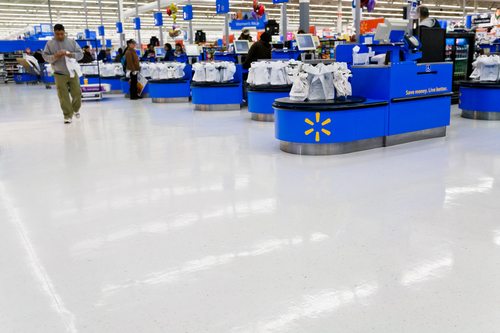 A food drive launched by the Dairy Department Manager of an Oklahoma Walmart to assist two employees has again spotlighted the impact of the low wages paid by the nation’s largest employer and, with total revenues of $476 billion, most profitable corporation. Michele Simon, a public health lawyer at Eat Drink Politics, noted in a recent report that a Walmart “employee who works 34 hours per week, which is Walmart’s definition of full-time, is paid $15,500 per year, which is about $8,000 below the federal poverty line for a family of four.” More than half of Walmart’s total work force of 1.3 million is estimated to earn less than $25,000 annually.

The ability of Walmart and other low-wage employers to sustain their workforces increasingly relies on heavy subsidies from government programs and from private charitable resources. A report issued by the Democratic staff of the House Committee on Education and the Workforce estimated “one 300-person store in Wisconsin may result in a cost to taxpayers of up to $1,744,590 per year—about $5,815 per employee.” Based on this data, Americans for Tax Fairness estimates that “Walmart receives $6.2 billion annually in mostly federal taxpayer subsidies” through their employees using a wide range of federal and state assistance programs. (Walmart spokesperson Randy Hargrove described this report as “inaccurate and misleading,” referring to its use of extrapolated data and adding that public assistance program eligibility requirements vary from state to state.)

These estimates mirror early studies looking at employees in other low-wage occupations. A 2013 report by the National Employment Law Project estimated that over 3.5 million fast food workers earned a median wage of $8.64 an hour and qualified for as much as 7$ billion in government assistance.

What is not in dispute is the fact that Walmart is itself a major beneficiary of the federal SNAP (food stamp) program. Americans for Tax Fairness noted in its report that Walmart told analysts last year that the company has captured 18 percent of the $76 billion SNAP market. Food banks and other community-based assistance programs also help to create this safety net for low salary workers. Eighty-eight percent of food bank clients have annual household incomes of less than $25,000, a level that includes many Walmart employees.

Ironically, the Walmart Foundation is a major supporter of food banks. “In 2013, we donated more than 571 million pounds of food—the equivalent of 369 million meals—to local food banks and hunger relief organizations like Feeding America and its 200 food banks across the nation,” reads the foundation website. “We know we can make an impact nationwide by inspiring associates to fight hunger in their local communities. In fact, 4,100 associates volunteered more than 13,000 hours toward hunger relief efforts in 2013.”—Marty Levine