Watch Out for a 2014 Conservative Foundation Strategy Attacking Public Unions 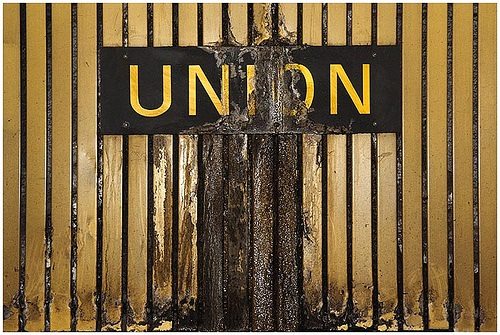 Here is a prediction that you might not see anywhere else: Conservative foundations and conservative think tanks will put a major emphasis on attacking public sector unions.

Overall union membership has been dropping precipitously in the U.S., down from 11.8 percent in 2011 to 11.3 percent of employed workers in 2012 according to the Bureau of Labor Statistics. The power of unions is really in the public sector, where 35.9 percent of workers belong to unions, as opposed to private industry, where only 6.6 of the labor force is in unions. The strength of public sector unions is particularly in local government, where 41.7 percent of workers belong to unions.

While congressional Republicans have spent fruitless time following Tea Party political obsessions, at the state level Republicans such as New Jersey’s Chris Christie and Wisconsin’s Scott Walker have squared off against public sector unions as a more practical political agenda. Diminishing the power of public unions, especially teachers unions organized at the school district level, characterized a significant emphasis of the Walker administration, which it achieved in the 2011 passage of Act 10, the “Wisconsin Budget Repair Bill,” which limited public union collective bargaining largely to wage issues. Exempting police and other law enforcement unions, public sector employers were prohibited by the law from collecting union dues and public unions were prohibited from mandating the payment of union dues in collective bargaining units. As a result, public union membership plummeted in the year following the Act. For example, despite the challenges to Act 10’s constitutionality that are still in the courts, AFSCME Council 24’s count of dues-paying members dropped from 5,900 to 690 early in 2013, and Wisconsin State Employees Union membership fell from 22,000 to less than 10,000.

Teachers unions have also been taking a big hit. The Wisconsin Education Association Council’s membership is down about 30 percent from its total prior to Act 10 of 98,000. As the WEAC loses members, an alternative organization is growing. The Wisconsin chapter of the Association of American Educators is picking up members, though only on a pace to reach 1,000 members by the end of the school year. AAE spokesperson Alexandra Freeze predicts a much larger infusion of members once the courts issue their final rulings on Act 10’s constitutionality, which she thinks makes potential AAE members uncertain.

Unlike teachers unions, the AAE doesn’t represent teachers in collective bargaining and claims to be free of any political agendas or political activism. However, it does provide members with liability insurance, legal counsel in workplace employment issues, and teacher scholarships and grants. Essentially, these are services to teachers other than union representation—and at a membership cost of about $180 per year compared to a larger dues assessment typical of the teachers unions. Essentially, it is an alternative to what the AAE calls “forced unionism.”

However, the AAE’s non-political self-description is a little suspect. The organization does take positions “if a certain percentage of its members vote to take a position,” according to this article in the La Crosse Tribune. The AAE has come out in support of Act 10, Governor Walker as he fought a recall effort, lifting caps on fully funded charter schools, and expanding “virtual and blended education.” That is nothing less than a political agenda, no matter what the AAE calls it.

To be clear, the AAE is not simply a Wisconsin creation. It has existed nationally for a couple of decades and is funded by several conservative foundations, based on these grant amounts listed in the Foundation Center online database:

AAE operates as a 501(c)(6) business league, distinguishing itself from 501(c)(5) labor unions, and as a 501(c)(3) public charity under the name of the AAE Foundation. According to their Form 990s, the AAE isn’t that big an operation in financial terms, given these annual revenues:

The AAE’s website claims partners or affiliates in New Jersey, Indiana, Utah, Florida, Georgia, Arkansas, Kansas, Oregon, Washington, Idaho, Colorado, and Louisiana. Among the various people on the boards of these AAE entities are Becky Norton Dunlop, a vice president of the Heritage Foundation who has also served on the boards of the Virginia Institute of Public Policy, Defenders of Property Rights, and the Phillips Foundation, and Alan Dye, identified as an official with the American Legislative Exchange Council and having served on the boards of several conservative organizations.

The AAE isn’t a big operation yet, but it has room to grow given the increasing advocacy of conservative think tanks and conservative funders against public unions. The results of this advocacy can be seen in public opinion polls turning against public unions—for example, in generally liberal California and other states, liberal and conservative—often prompted by a perception that the public unions are keeping government expenditures and taxes high, despite studies that suggest that the public unions, at least at the state level, are not correlated with state government spending and hiring trends one way or the other.

Nonetheless, conservative think tanks are turning up the heat on public unions. Last year, a conservative think tank in Pennsylvania, the Commonwealth Foundation, with an introductory campaign letter signed by Senator Pat Toomey (R-PA), launched “Project Goliath,” meant to “slay” public sector unions. In California, the Christian Educators Association International filed suit challenging the constitutionality of teachers unions to collect fees from teachers who do not want to be represented by a union. The Heritage Foundation maintains a constant barrage of articles blaming public sector unions for a range of economic privations, with special emphasis on challenges to teachers unions, such as the legislation introduced in Kansas.

While the Ted Cruz wing of the Republican Party crusades against the Affordable Care Act, governors such as Walker and Christie have mobilized against an identified enemy in the form of public sector unions. Watch in 2014 to see if conservative think tanks backed by foundations such as Bradley, Walton, Hume, and Anschutz step up their efforts to attack public unions, especially in the 2014 elections.—Rick Cohen

This article has been changed from its initial form. The CRP chart reflects the preponderance of donations to Democratic, rather than Republican, candidates. NPQ regrets the typo.