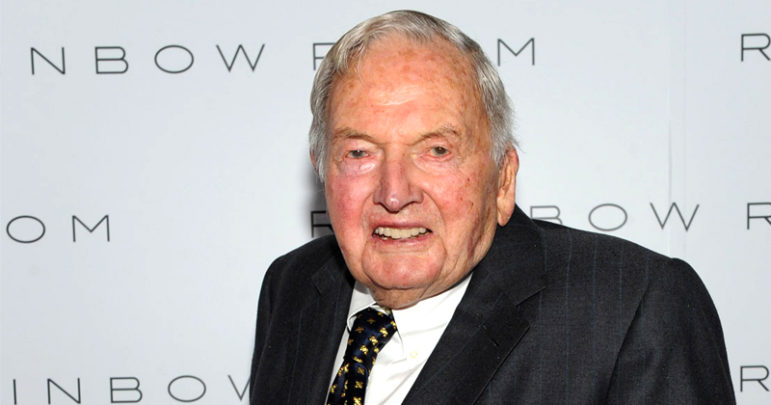 The last living grandchild of America’s first billionaire has died at age 101. David Rockefeller was the last of his generation of heirs of Standard Oil cofounder John D. Rockefeller. David Rockefeller’s life traces an evolution of philanthropy in America. His passing may also serve to mark a shift from his grandfather’s approach to charity, which has been deeply embraced by philanthropists, to new approaches, tools, and legal forms.

He “leaves a legacy that eludes a simple description. At once the grandchild and heir to oil tycoon John D. Rockefeller and a globetrotting billionaire banker in his own right, Rockefeller also earned a reputation as a prodigious patron of the arts,” writes Colin Dwyer for NPR.

David Rockefeller is credited with giving away more than $2 billion during his lifetime. He also signed The Giving Pledge, writing in his pledge letter that he intended to give half of his fortune away. Forbes estimated that at the time of his passing, his net worth was about $3.3 billion.

Rockefeller’s grandfather, John D. Rockefeller, died in 1937 with assets that equaled 1.5 percent of America’s total economic output. (In current times, it would be equivalent to about $340 billion, or more than four times that of Bill Gates, currently the world’s wealthiest person.)

“God gave me money,” he was quoted. A devout Baptist, his biographer wrote that he “did not apologize for it. He felt at ease and righteous following Methodist preacher John Wesley’s dictum, ‘Gain all you can, save all you can, and give all you can.’”

In the early 1900s, John D. Rockefeller undertook a number of efforts in education and health that using methods that, in many ways, shaped much of what is still described as “best practices” by future philanthropists and donors. His projects were also of grand scale. His General Education Board was particularly active in supporting black schools in the South. The Sanitary Commission tackled and beat hookworm disease in the American South. At the time that effort began, more than 40 percent of school-aged children were infected with the disease that caused impaired learning and lethargy.

To continue that work, he created the Rockefeller Foundation. He initially sought approval from Congress for this new foundation, but he was stymied and instead went to New York State. The result was a set of rules and assumptions that, by default, did much to define the legal ground rules of the foundation world we know today.

Other personal precepts he developed after having been taken advantage of—by religious fundraisers, mostly—included an emphasis on giving only if others matched his gift, giving to “the best” nonprofits and causes, measuring success with metrics, and timing of giving: never first in. Many philanthropists today unwittingly follow a set of rules developed a century ago, primarily in reaction to failed projects.

Bill Gates openly acknowledges the influence of Rockefeller and the concept of grand challenges. Rockefeller realized the scale of wealth and resources required new kinds of thinking about the role of philanthropy. Rockefeller pioneered several large-scale efforts testing out a number of concepts in the early 1900s that the Bill & Melinda Gates Foundation refined and expanded.

When John D. Rockefeller began his large-scale philanthropic work, he was America’s first billionaire. Today, the U.S. alone has more than 540 billionaires. Granted, a billion dollars isn’t what it used to be, but it’s still a profound amount. Many wealthy still use very conventional approaches toward giving, but that’s changing as well.

David Rockefeller, when he wrote his Giving Pledge letter, had advice for philanthropists of all types:

Philanthropists, at their best, try to address serious societal problems and occasionally come up with innovations that lead to enduring change. In the end, success requires much more than financial resources, although money is, of course, essential. Good ideas are just as important; otherwise one risks wasting both the funds and the opportunity. Effective philanthropy also requires patience—patience to deal with unexpected obstacles; patience to wait for the first, slight stirrings of change; and patience to listen to the insights and ideas of others.

The world of doing good continues to evolve in form and won’t be limited to a tax deduction or nonprofit legal form.—Kevin Johnson