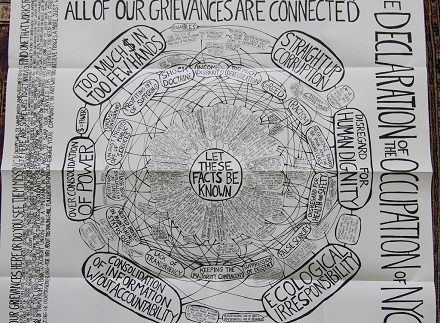 Rob Kall, the indefatigable executive editor and publisher of OpEd News, has written a piece on the visioning process that occurred at the Occupy national gathering (#Natgat) in Philadelphia earlier this month, which NPQ’s Cohen Report detailed last week. Kall has a very useful perspective, as he was a participant in the process. His article reproduces and comments on the results of the in-person visioning process that occurred at the national gathering. The formal visioning document, titled “A Vision for a Democratic Future,” is available online and reprinted in Kall’s article.

Kall described the visioning process as a combination of “pragmatism and poetry” and “a beautiful thing to watch and participate in. People were passionate, strong, but cooperative, walking the talk of interdependence and cooperation.” The report is fundamentally a list of ideas generated, according to Kall, by more than 250 Occupiers. The ideas are ranked by the number of votes each suggestion garnered in a modification of a nominal group process. Kall warns, “It is almost certain that detractors will mock some of the items but this is a list that hundreds of individuals participated in generating. It’s the way horizontal democracy and direct democratic processes work.”

Kall’s admonition may be because observers might have expected something strategic or tactical to come from the national gathering, a platform or manifesto for a revived Occupy movement or the next stage in the evolution of Occupy. The visioning results don’t go there. Rather, they asked the participants, “What is your vision for a democratic future? What does it look like? What does it include?” Like the consensus-oriented Occupy Wall Street general assembly decision-making process, the national gathering participants worked from the idea that “our process itself was our message. . Since we seek a world where all voices are heard, all ideas are considered, and all opinions matter, our movement’s direct democratic model is more than just a decision-making process: it is…one of our primary guiding philosophies, and it deeply influenced the development of both the National Gathering and its visioning process.”

Once again, the result will frustrate Occupy critics who complain that Occupy has no (more specific) list of demands and no political platform around which to organize. As reprinted by Kall, the top ideas generated by the #Natgat participants (along with the number of individuals supporting or voting for the concept) were as follows:

While acknowledging the instruction that participants were not discussing strategies and tactics, the list is still interesting for the relatively minimal content that relates to the functions and resources of government. It is a list with plenty of libertarian feeling regarding the ultimate goals of the society the #Natgat people want to see. It doesn’t sound Republican, Democratic, or centrist in the slightest, hardly supporting the notion of some critics that this desultory Occupy meeting is simply a political front for the likes of George Soros or MoveOn.org. The fact that the Occupy national gathering resurrected and embellished a decision-making process criticized by even sympathetic outsiders as unwieldy and protracted raises questions for many people as to whether the next phase of Occupy even has the wherewithal to think about a specific political strategy.—Rick Cohen