Which Nonprofit Sectors Were the Biggest Winners and Losers in 2014? 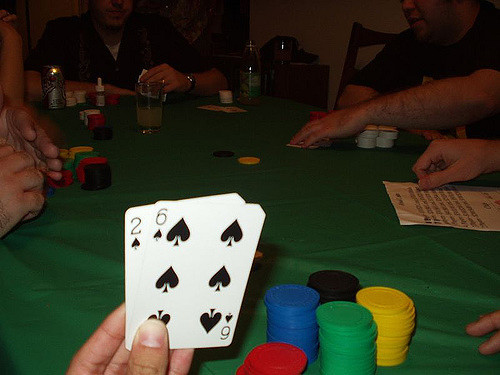 The following comes from the Urban Institute’s National Center for Charitable Statistics, or NCCS. We are pleased to share publication of this piece with them. Please visit their website for more information like this!

A closer look at Forms 990 and 990-EZ by sector reveals which types of nonprofits were the biggest winners and losers in 2014. 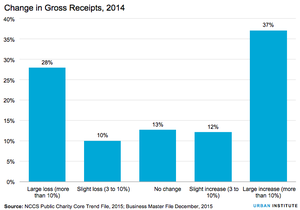 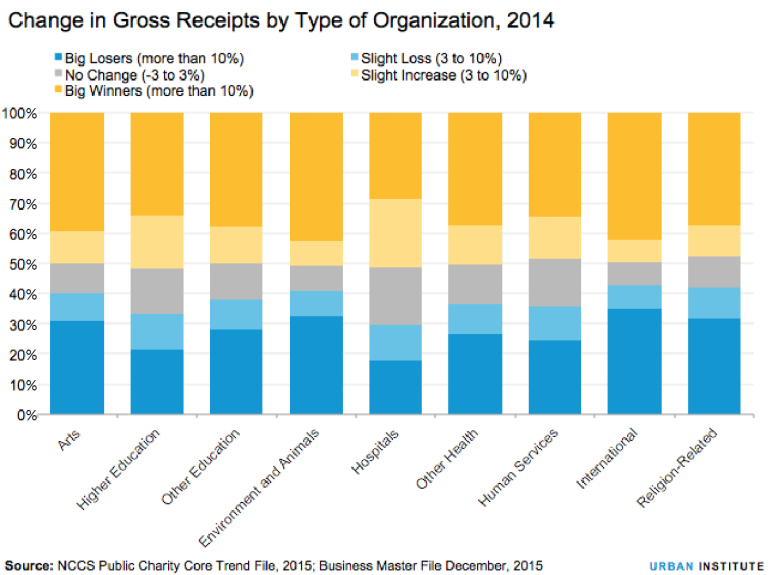 Public charity growth is strong, but still not as strong as it used to be 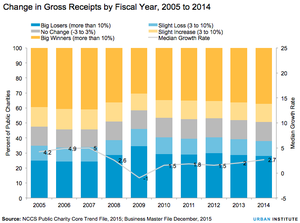 When will we see pre-recession growth rates again?

In short, 2014 was a good year for many public charities with nearly half seeing a slight or large increase in gross receipts and more than one-third seeing more than a 10 percent increase over the previous year. Nevertheless, with organizational growth rates still below pre-recession levels, the question remains—when will public charities see pre-recession annual growth rates again? A few positive reports leave us optimistic for continued growth into 2015. (registration required) predicted above average growth in giving during 2015, which would most likely translate into increased gross receipts at public charities. In addition, nonprofit hospitals saw net income grow in 2014 after several years of expenses outpacing revenues, leading Moody’s to upgrade nonprofit hospitals’ credit outlook from negative to stable, the first time it has been upgraded since 2008. However, with the S&P 500 and Dow Jones Industrial Average both finishing 2015 lower than they started—the first time this has happened since 2008—we may see a slower rise to pre-recession growth rates than we had hoped.

Thomas H. Pollak is assistant director of NCCS. His recent projects include developing a pilot electronic project for the Form 990 and studies using the digitized database.