White House on Ferguson: Speaking Softly, with a Small Stick 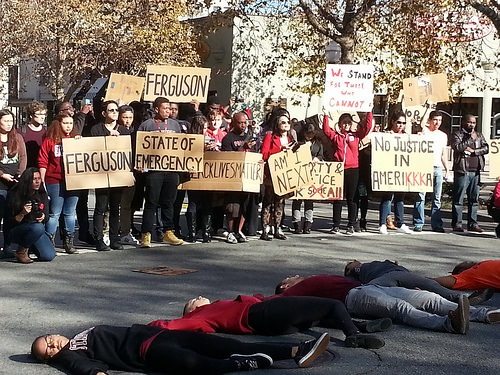 It’s another White House task force. President Obama’s “Ferguson Day” has resulted in the creation of a task force on “21st Century Policing.” It will report back to the president in 90 days to identify policing “best practices.”

Haven’t we seen this action MO from the Obama White House before? Remember the task force assignment to Vice President Biden on job creation? Or the My Brother’s Keeper Task Force report? Remember the Middle Class Task Force? And then there was the Equal Pay Task Force, which somehow overlooked the gaps between compensation for men and women who happened to work in the White House itself.

Washington Post columnist Dana Milbank wrote, “After a week of Ferguson protests that have roiled the country, President Obama on Monday did what he generally does in times of crisis: He had a meeting.”

Milbank’s commentary about the president’s action agenda on Monday was scathing:

“The grand-jury decision not to charge the white police officer who killed an unarmed black teenager in Missouri has given Obama another opportunity to show strong and decisive presidential leadership. And, once again, Obama is using the bully pulpit like a 98-pound weakling. If any more chin-stroking goes on at this White House, the president’s advisers are going to have chafe marks on their jawbones.”

Milbank cited unnamed Democratic leaders, plus civil rights leader Rev. Jesse Jackson and former Massachusetts Governor Deval Patrick, suggesting and hoping that Obama might go to Ferguson—as we have been proposing since the aftermath of the killing of Michael Brown, long before the grand jury non-indictment. But in response to questions from Milbank and other reporters, Obama has no plans for a Ferguson visit.

“Obama, by going to Ferguson and talking about Ferguson elsewhere around the country, could start the conversation about race we always talk about but never seem to have,” Milbank writes. “The nation’s first black president is in a unique position to quell protests, but also to give voice to legitimate grievances about the justice system.”

Not only did Obama demur on a Ferguson visit (remember, he was not on the scene in Florida after the Trayvon Martin and Jordan Davis killings either), but he also went in reverse on other issues. In his package of announcements on Monday, he failed to restrict transfers of military equipment to police departments despite having expressed concerns about the practice before, preferring instead to track the military equipment handed over to local police departments and offering to fund police body cameras. The body cameras were part of the president’s call for $263 million over three years that would fund 50,000 cameras (costing $75 million, with an additional 50 percent match by local police departments) plus new training for police departments and improvements in federal oversight. The funding, however, must be approved by Congress, which hasn’t occurred yet. The White House description of the funding proposal is here.

Civil rights leaders who participated in the White House meetings went along with the Obama strategy, lauding the latest task force. “I think we have every reason to believe this is going to result in something real,” said Sherrilyn Ifill, president of the NAACP Legal Defense and Educational Fund, according to Politico. Rev. Al Sharpton’s take was a bit confusing, but seemed to suggest that the Obama task force will accomplish what others haven’t in the past: “This was a historic meeting, to have the president and vice president sit with all of us, and mayors and law enforcement to commit to not just another commission, another study, we’ve had too many, but that he would put his full weight behind it.”

At the same time President Obama was announcing his policing task force, the Ferguson Commission, profiled in NPQ on November 19th, had its first meeting, and it was a tough one. The New York Times reported that the Commission’s first meeting “began with several hours of discussion by members about the principles and commitments that would guide their work,” but was followed by controversy:

“After a restive audience member stood up and asked when the panel would take public comment, others began shouting down the commission members as they tried to respond…[and still] others asked if the group was a sham.”

Other newspapers also covered the difficult first meeting of the commission. The community reactions hint at the decreasing patience of the public for more talk in place of leadership and action.

Leadership from the commission is one thing. People like Rev. Starsky Wilson of the Deaconess Foundation on the Ferguson Commission will undoubtedly do all they can to give a full airing to the issues in Ferguson that might be partially addressed by local and state action. But for President Obama, leadership ought to mean something more than meetings and task forces. “Speak softly,” the presidential coiner of the phrase “bully pulpit” once said, “but carry a big stick.” This White House is reasoned and thoughtful in its talk, but the stick so far is very small.—Rick Cohen