Who Does Organizing for Action Work For? 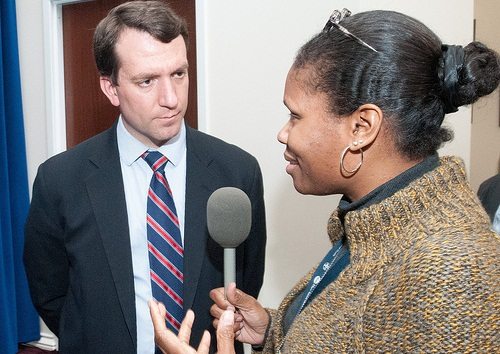 President Obama’s successful campaign apparatus is converting—for a second time—to an ongoing advocacy organization. After the 2008 campaign, the well-oiled Obama machine reformed as Organizing for America, a component of the Democratic National Committee (DNC). The first OFA became a tool for organizing support for President Obama’s major first term agenda initiatives. In the aftermath of the even more successful reelection campaign, there will be a new OFA—a 501(c)(4) called Organizing for Action. The announcement came in the form of a videotaped message by First Lady Michelle Obama, which you can watch here:

The vigorous debate behind this announcement is a split between some people who think that there is a big upside to the new organization and others who aren’t quite so sanguine. On the plus side, commentators have been generally positive about the selection of White House operative Jon Carson as the new OFA’s executive director. As director of the White House Office of Public Engagement, Carson is well respected by activists. Created outside of the DNC, the new OFA could organize for policies and put pressure on Democrats for policies that the official party infrastructure doesn’t quite support. Also, because it is independent of the Democratic Party, the new OFA could live beyond the remainder of Obama presidency. As the first black man to be elected and then reelected president, Obama has the potential to attract and galvanize support and attention after his second term is over. The question will be what the future Obama initiative would want to emphasize and accomplish. Despite what some analysts see as those pros, the new organization also comes with what others point to as cons.

By becoming a (c)(4), the new OFA will be able to raise money independently of the party apparatus, but therein lies a problem. The DNC has to report its fundraising sources and amounts, as required by the Federal Election Commission, but a 501(c)(4) can raise unlimited money from undisclosed sources. OFA could voluntarily disclose its contributors, but so far there has been no statement as to whether or not it will do so. The organization of both Republican and Democratic organizations as (c)(4)s was designed to take advantage of the secrecy allowed for (c)(4) fundraising. Would the new OFA be structured as a (c)(4) (as opposed to some other organizational structure that is required to disclose to the FEC or the IRS) if not for the secrecy provisions?

This potential lack of disclosure comes with OFA’s plan to raise money not only from individual contributors, but from corporations. The Obama administration’s track record on corporations has been subject to criticism that the president hasn’t exactly been tough on the corporate sector. Already, people otherwise supportive of the Obama administration, such as former Democratic Party leader and former Vermont Gov. Howard Dean have called on OFA to refuse corporate donations.

OFA’s initial slate of board members is straight out of the Obama reelection campaign, including Jim Messina, Stephanie Cutter, Robert Gibbs, Julianna Smoot, and soon, David Plouffe. It is very separate from the leadership of the Democratic Party. It could be that OFA represents the Obama team’s limited faith in the Democratic Party or perhaps an analysis that something is needed to pressure Democrats to stay in line behind the president’s second term agenda.

The Obama campaign reportedly has an e-mail list of between 12 million and 13 million names, the basis of a remarkably powerful independent organization. The collection of Obama campaign loyalists in OFA suggests the creation of a group that, whatever its commitment to a political agenda, may be as responsive to Obama as it is to progressive politics.

The new OFA leadership pledges that the organization will not accept donations from lobbyists, but who needs lobbyists to front for corporate special interests when corporations can make unlimited donations on their own? As a 501(c)(4), even if the leadership makes commitments to disclosure, OFA can still be a politically allied social welfare organization camouflaging the unlimited corporate donations unleashed by the Supreme Court’s Citizens United decision. Given OFA’s leadership by former Obama campaign staffers, how likely is it that OFA will be able to take the organization through small “d” democratic governance processes in any direction other than one supported by Messina, Plouffe, and other campaign operatives promoting the president’s agenda? –Rick Cohen