Will Al-Jazeera America’s Debut Wow Us? 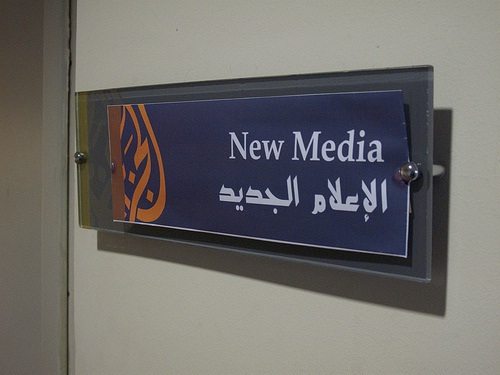 Slate columnist Matthew Yglesias worries that Al-Jazeera America, launching next week with an ambitious goal of producing multiple hours a day of serious news reporting, may be a bust because it will be too serious.

Most people get their news from television, but as Yglesias points out, the industry is heavy on talking heads and visuals and light on reporting. His hope is that Al-Jazeera’s primary backer, the Emirate of Qatar, will invest in and create informative televised news that people actually watch.

His view is that commercial news outlets, for all their faults, “think long, hard, and creatively about how to get people to pay attention” because they are motivated by profit, which is driven by advertising rates, which are driven by ratings.

Most journalists realize that in order to communicate to the public, news organizations must recognize that they need to make their writing—or video or audio—interesting. But many old-school journalists don’t really buy into that philosophy and think it beneath them to care about whether their work actually gets read.

The debate over whether or not journalists have an obligation to provide people with news they need (political and policy stories from Washington, your state capital, or City Hall) vs. news they’ll read (celebrity scandals or spectacular accidents and natural disasters) is as old as the profession itself.  We all know that Sports Illustrated sells the most copies when it publishes its swimsuit issue, although the New York Times wins Pulitzers because of its coverage of national politics. Most journalists will say there should be a balance, but what that balance is can be very subjective.

This debate is becoming more and more relevant as nonprofit news organizations rise in prominence in American journalism. More Americans are getting their radio news from NPR rather than commercial radio networks, more metropolitan newspapers are adopting nonprofit business models (where they augment traditional advertising and subscriptions with foundation grants) in order to survive, and more Americans are relying on the websites of nonprofit advocacy groups for information on those issues, places, and people they care about.

The transition from print to the Web has increased pressure to produce content that people want to read. In traditional metropolitan print newspapers, as long as someone has subscribed, it doesn’t matter whether they actually read a story, but online, page views are critical to setting advertising rates, and if readers don’t click on a story, the page doesn’t get viewed.

In Yglesias’ experience, “noncommercial venues are often…set up to avoid the failings of commercial ventures, [and] they disdain dirtying their hands with the business of making things interesting and gaining an audience. If they do a story that they think is well-executed and important and people don’t seem to care, they pat themselves on the back and tell themselves that this just goes to show how high-minded their reporting is.”

He says that is why nonprofit investigative journalism outlet ProPublica normally partners with commercial media outlets to run their reports, combining commercial publishing’s focus on audience size with the true virtue of nonprofit media: willingness to shoulder the large costs of painstaking, tedious, difficult and labor-intensive serious investigative reporting. The challenge of investigative reporting isn’t that there’s no audience for it, but that it is expensive to produce—so much so that, for it to be profitable, the audience needs to be impossibly large.

“An average traffic blog post that someone cooks up with 90 minutes of work is a much better investment than a months-long investigation that gets ten times the traffic,” he writes, adding, “the hope has to be that Al-Jazeera will avoid the fate of fussy nonprofit indifference.”

With all due respect, NPQ would suggest that Yglesias has published a glib, broad brush and largely inaccurate oversimplification of a complex situation that is at the core of the future of civil society. Watch for NPQ’s coverage of a recent study about how to measure the impact of nonprofit news. —Larry Kaplan