Will Deep-Pocket Foundations Join the Call for Gun Control? 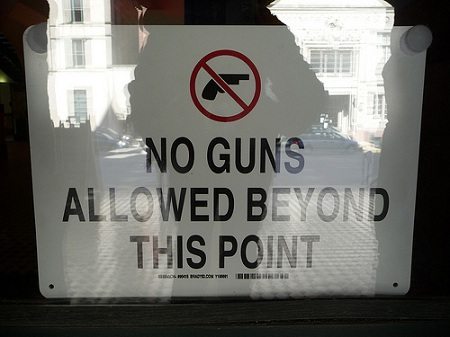 One of our predictions for 2013 was that the White House and other levels of government would be more interested than ever in recruiting foundations to support or participate in governmental initiatives. So it didn’t surprise us to find that White House officials such as Department of Health and Human Services Secretary Kathleen Sebelius, Office of Social Innovation and Civic Participation Director Jonathan Greenblatt, and members of Vice President Joe Biden’s staff held a “listening session” with a number of private foundations that, according to Politico, “have not previously been identified with major gun control efforts.” Among the participating foundations were the Open Society Institute, the McCormick Foundation, the Robert Wood Johnson Foundation, and the California Endowment.

Politico described the foundations as “traditionally work(ing) in public health fields,” a description that works for Robert Wood Johnson and the California Endowment, but not for OSI and McCormick, which have different or broader program agendas. Although the White House didn’t comment on the foundation conference call, one of the participants admitted that the likely motivation for convening “a bunch of deep-pocketed funders on the phone” was “not because they’re great dancers.” The participant told Politico, “They are testing the water to see, will you people with deep pockets, will you be there to back us up?”

There’s a good reason for the White House’s concern for recruiting deep-pocketed players on the side of gun control. Vice President Biden’s task force is expected to report back sometime in January with recommendations for enhanced gun control. As a step toward that end, the Vice President has invited the National Rifle Association and other gun rights organizations to meet with his task force today. Our analysis of the money behind the gun lobby showed the NRA alone spending over $240 million in 2010, more than the entire grantmaking of many major foundations. The money available to gun control groups such as the Brady Campaign to Prevent Gun Violence is a tiny fraction of the resources available to the NRA.

Already, leaked information about the breadth of Biden’s interest in potentially extending gun control beyond simply reviving the assault weapon ban and limiting the purchases of high capacity ammunition has sparked opposition, not just from Republicans, but also from some Democrats. For instance, Sen. Heidi Heitkamp (D-N.D.), who sports an “A” rating from the NRA, recently asserted that sweeping gun control legislation would not pass Congress. And while gun rights groups may be meeting with Biden’s task force this week, they have planned a “Gun Appreciation Day” for January 19th, two days before President Barack Obama’s second inauguration. The Gun Appreciation Day website lists approximately 40 sponsoring organizations. The National Rifle Association isn’t on this list, though we can’t imagine that it won’t tacitly or overtly applaud anti-gun control activists showing up in Washington for President Obama’s inauguration.

After Tucson, Aurora, and Newtown, the feeling seems to be that the time for enhanced gun control has come. However, no one should underestimate the power of the gun lobby. Writing in the Chronicle of Philanthropy, Pablo Eisenberg writes that society would have been much better served if nonprofits and foundations had marched through Capitol Hill advocating gun control rather than plumping for the charitable deduction. He notes, “Only a handful of nonprofits have made gun control a priority. Even fewer foundations have given money to the cause, and most of their grants have gone to research, not to mobilize the opposition [to the gun advocates].”

If the NRA and its allies are to be stopped from picking apart the gun control proposals that may emerge from the Biden commission, the foundations on the White House call and others will have to put their capital behind the “sweeping advocacy campaign” that Eisenberg says is needed. Time will tell if the foundations step up to the plate, but as Eisenberg concludes, “there is no time to lose.”—Rick Cohen