Will Democracy Be the Death of TFA? 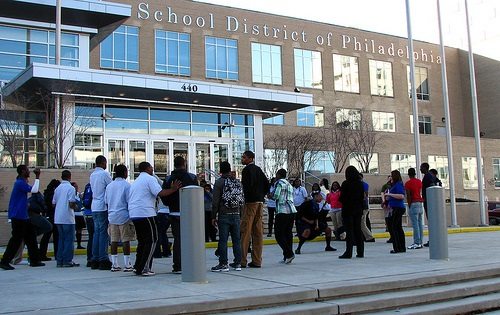 Amy B. Dean, author of A New New Deal: How Regional Activism Will Reshape the American Labor Movement, writes in Al Jazeera America that she believes that democratically-elected school boards are the vanguard for resisting top-down education reforms like Teach for America and charter schools. She believes that while there is opposition to what she calls pro-privatization reforms in many cities, it is difficult for that opposition to be heard in places where decision makers are appointed—Philadelphia and Chicago, for instance—rather than elected, as in Pittsburgh, where school board members recently and famously canned an existing contract with TFA. Dean believes that appointed boards often simply act as rubber stamps for mayors or governors while democratically elected boards are more accountable to the public.

“Since December, the Pittsburgh Board of Education board has also rejected three charter school applications, saying that these charter schools did not have an adequate plan for serving students with special needs and English language learners. And it’s not just Pittsburgh that’s benefiting: Last November, a decisive school board election in Bridgeport, Connecticut gave control of the body to candidates who support funding and fixing traditional public schools, swinging the balance of power away from an outgoing superintendent who oversaw the sweeping charterization of both New Orleans and Philadelphia. (In both of those cases, vast disruption followed with little tangible gain.) Such actions seem to show that when a community is organized, and has the ability to exert their influence, it is harder for top-down organizations like TFA to control the narrative or public policy.”

The pendulum swing, however, carries with it the potential to ignite the next wave of school reform-based candidates and elections. School boards are typically insular, elected by school district “insiders” including school district employees (often a major community employer) and the families of current students. In some districts, as many as four out of five voters do not have a child or grandchild in public school and are not employed by the local school district. These voters tend to vote only when they believe the school district is on the “wrong track” and not listening to the broader community. Flare-ups are most common when taxes are raised significantly or when curriculum changes come under fire from those “outside the information loop” during the adoption process. Local school boards need to balance their duty to support public education and its constituencies with a healthy respect for the majority of voters who will remain benignly apathetic until they perceive themselves neglected and aggrieved.

NPQ would love to hear from readers about this dynamic.—Ruth McCambridge and Michael Wyland