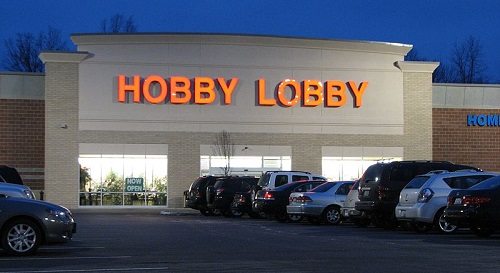 Hobby Lobby won its case at the Supreme Court, allowing closely held corporations to refuse to pay for some forms of employees’ contraception on religious grounds, but will it feel a financial blowback from customers unhappy with their politics? Small demonstrations are popping up at Hobby Lobby stores around the country; in Rhode Island, for instance, 70 picketers showed up at Warwick’s Hobby Lobby hours after the decision was made, and on Monday dozens of protestors handed out condoms, IUDs crafted out of colorful pipe cleaners, and coupons to competing stores at the grand opening of the Burbank store in California.

One Burbank protestor said, “If we don’t stop and point out to people that our rights are being taken away, apathy will take over and people will just let the corporations run over them.”

Exactly the point, some might think. Carolyn Mark of the Rhode Island chapter of the National Organization for Women said, “The Supreme Court’s decision in the Hobby Lobby case shows a shocking disregard for the religious liberty of working women who should have the right to make their own heath care decisions in concert with their doctor and their faith and not to have those decisions made for them by their employer. This decision will most certainly embolden those forces in our society that wish to withhold a full range of health care options for women.”

Boycotts are, of course, a traditional part of our social change arsenal. Is the strategy likely to be used here, and to what effect?—Ruth McCambridge