Will the Zimmerman Protests Spark a Revived Civil Rights Movement? 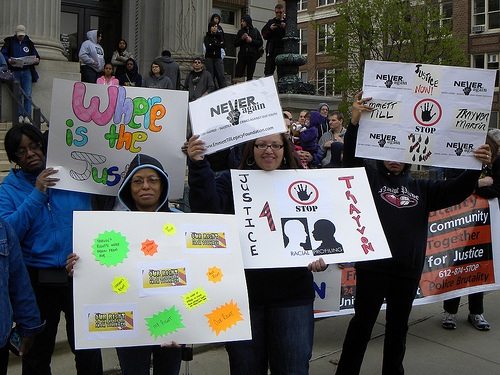 The Florida court decision acquitting neighborhood watch volunteer George Zimmerman in the death of teenager Trayvon Martin has sparked a renewal of street protests and calls for demonstrations not seen since the dwindling presence of the Occupy movement. Most of the press coverage of the protests over the killing of the teenager armed with an ice tea and a bag of Skittles describes generally peaceful assemblages, although a few have been marred by violence, with little mention of the advocacy organizations helping to convene the demonstrations.

There is no question that few of the demonstrations are sui generis. At Howard University in Washington, D.C., the rapidly convened demonstration after the announcement of the decision was organized by the campus chapter of the NAACP. In Bridgeport, Connecticut, the local NAACP and a group called Save Our Babies are organizing two protests. In Springfield, Massachusetts, the NAACP is collaborating with a nonprofit called Alive with Awareness, Knowledge, and Empowerment (AWAKE) to organize a candlelight vigil. As of earlier this week, the NAACP reported that nearly one million people had signed an online petition demanding that the Justice Department re-try Zimmerman on federal civil rights charges. And, although most recently best known as an MSNBC news host, the Rev. Al Sharpton is working through his nonprofit, the National Action Network, to organize protests in 100 cities.

Regardless of one’s thoughts about the Zimmerman case, there is no question that the jury’s verdict has stimulated widespread outrage over the shooting death of an unarmed teenager. Will this turn into a rejuvenation of the civil rights movement? Or will this energy dissipate like the Occupy protests? Unlike Occupy, which never generated a cohesive policy agenda, some consistent policy targets have emerged in the wake of the Zimmerman verdict: repeal of the “Stand Your Ground” laws in several states (although Zimmerman’s defense team did not use that law as an affirmative defense in this trial), reexamination of overly broad self-defense statutes in general, and a new reconsideration of the disparate outcomes for blacks in the judicial system. Disparate socioeconomic outcomes for black men and boys, an issue raised consistently by the leadership of the California Endowment (for example, here and here) and by the Community Service Society of New York, are also attracting attention in these protests, though some suggest that some of that attention should go toward black-on-black violence among young men, as exemplified by the 67 people shot and 11 killed over the July 4th holiday weekend in Chicago.

Can this energy be sustained? Forty-five years ago, in 1968, there were widespread protests in the U.S. and other countries. People mobilized in the U.S. against the war in Vietnam; in Europe, it was against the Soviet invasion of Czechoslovakia. University of Oxford modern history professor Robert Gildea questions whether the spirit and enthusiasm of 1968, which many baby-boomer readers of the Quarterly undoubtedly remember and participated in, could be revived today. While he cites the writing of David Graeber (The Democracy Project) who declared, in Gildea’s words, “the Occupy movements…a success, [in] that at the very least they unmasked financial feudalism, mobilised energies and set a new agenda,” Gildea believes “that protest today is a good deal more difficult than it was 45 years ago.”

He notes that many protests against current conditions are “dismissed in short order as out of touch with reality.” He points out that in 1968, the environment was “one of high employment and social possibility,” compared to “the levels of debt that saddle young people of today’s generation, and the narrowness of opportunities ahead of them.” He also suggests that protest has become more difficult because “the privatization of public spaces offers little scope for the occupation or liberation of such spaces for protest.”

Finally, he asks, “where are the icons of political liberation to take the place of Che Guevara or Martin Luther King?” While Guevara doesn’t get quite the widespread adulation today that he got in the 1960s as a frequent face on t-shirts, the Zimmerman protests do raise the Martin Luther King question. Speaking on television and through social media against the Zimmerman court decision have been, among others, the charismatic Van Jones, a former aide to President Obama; and Cornel West and Tavis Smiley, the latter two persistent critics of how poor people fare in this society. Organizing much of the protest activity are the NAACP’s Ben Todd Jealous, a former foundation CEO, and Rev. Sharpton. Are they, or others, the iconic leaders from the nonprofit sector to turn the Zimmerman protests into a stronger, deeper, more long-lasting movement?—Rick Cohen