Will this Revolution be “Televised”? Social Media and Civil Rights in the 21st Century 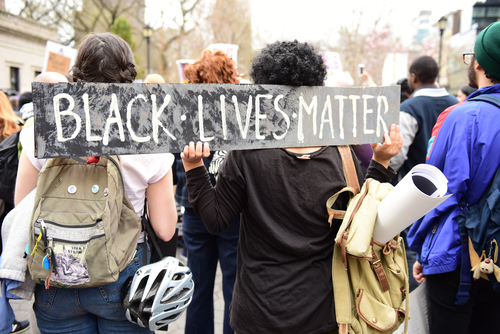 With all the hashtags, vines, Tumblrs, and Instagrams, the eruption of the Black Lives Matter movement was never going to be an isolated account read only in a newspaper. Social media has radically altered our expectations about the news. We are no longer silent observers; rather, we can be in the center of the action even when thousands of miles away.

The documentary power of social media has forever changed the landscape of how we report, experience, and participate in protests as well, as yesterday’s New York Times Magazine article indicates. It is through the social media response to the Ferguson protests that one of the most prolific and active documenters of this 21st-century civil rights movement became involved.

DeRay McKesson, 29, originally from Baltimore and a Teach for America alum, was working in the public school system in Minneapolis when he was struck by the discrepancies between the accounts of rioting he was seeing in the media and those he was reading on Twitter. To find out for himself, McKesson went to Ferguson to see what was really happening. He was tear-gassed by the police in what he described as a peaceful protest.

His tweets from that night are gripping.

Y’all, tons of police. Tear gas. It has begun. #Ferguson

Phone is dying. I am nowhere near my car. I am lost in #Ferguson. Really bad car accident. Looting across from it. Pray for me. #Ferguson

That first night in Ferguson changed everything for McKesson. “I just couldn’t believe that the police would fire tear gas into what had been a peaceful protest,” he told Kang. “I was running around, face burning, and nothing I saw looked like America to me.”

For McKesson, tweeting the Black Lives Matter movement is an art form, as seen in the interactions reporter Jay Caspian Kang records in his article. His tweets are known for their conciseness and precision. They are meticulously put together and fact-checked. Even while preparing for a speech he was giving for the anniversary of Bloody Sunday, McKesson would make sure his speech was written so that it could be quoted on Twitter.

While in Ferguson, McKesson also meet Johnetta Elzie, who also became one of the prominent voices of the movement. Elzie and McKesson began appearing on national television. “Experts” on the situation, they helped criticize some in the mainstream media for their slanted, sensationalized reporting of the protests. (Similarly, Geraldo Rivera was also called out for his own reporting of Baltimore in the now-viral video of a protestor trying to set the reporter straight.)

Kang was with Elzie and the McKesson when the news broke about 19-year-old Tony Robinson, shot to death unarmed in Madison, Wisconsin.

“Piece by piece, a digital portrait of Robinson emerged: a photo of him in a graduation gown, his arm around a female friend; a few tweets he sent out in the days before his death. Then, around midnight, dinner long gone by, McKesson sighed and held up his phone to show Elzie a photo of the front steps of Robinson’s home, which were streaked with blood.”

This moment in civil rights history has let the Internet propel unknown faces to the forefront of the battle for justice. Though the movement is largely without leadership, it has the sense of interconnectivity that comes from the synchronicity of social media: We’re all tweeting, liking, and reposting the same things.

Nevertheless, while social media has enabled BLM to connect, it is the shared frustrations and pain that protestors have harbored and repressed that have made it into a lasting movement.