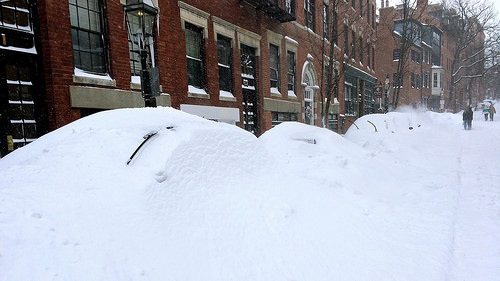 Whilst for many Tuesday’s snow brought only an anticlimactic paid holiday, the weather conditions threw up more pressing complications for thousands of low-paid workers in the Northeast.

There are up to 577,000 people earning just at or below the minimum wage within the region affected by the storm, according to this report created by the U.S. Bureau of Labor Statistics (BLS). Unavoidable interruptions to working life, such as winter storms like Juno, have a different effect on low-wage workers than those earning a more sustainable salary. While employers in certain northeastern states are required by law to offer paid leave, existing laws do not protect those who need their coverage most, excluding those who have to miss work due to childcare needs or disruptions to public transit services. Therefore, many of the low-wage workers employed by service industries are unlikely to be paid if they cannot get to work.

A hotel maid told Al Jazeera America, “My boss is making me work tonight and tomorrow night. If I didn’t go in, I would lose my job.” She has to commute 25 miles on dangerous roads to make less than minimum wage. Amy Traub, a senior policy analyst at liberal think tank Demos, pointed out that those affected are also generally employed in the service sector, which is particularly inflexible:

Despite the existence of paid leave laws in New York City, Massachusetts and Connecticut, the situation is the same even in ideal weather conditions. The BLS estimates that only 20 percent of the lowest paid tenth of workers have paid sick leave, in stark contrast to the 98 percent of the highest paid tenth. Workers are faced with a choice—or not, in fact—to go into work or lose their jobs. This means that taking time off for sickness or other personal reasons is unfeasible. Especially in places like New York City where space is scarce and gentrification is quickly spreading, it is often the case that these workers live further afield, meaning that they are even more affected by the elements.

Inequality is problem on the global agenda for everyone. Indeed, the widening income inequality gap was identified by the World Economic Forum as the most significant trend of 2015 in terms of the key challenges facing the world’s global leaders. In both developed and developing countries, the poorest half of the population often controls less than 10 percent of its wealth.

These issues are cyclical: As people feel increasingly marginalized by society, social cohesion is weakened and our democracies are damaged. Income inequality and the laws that enable and exacerbate this are part of a broader issue that is essentially an inequality of opportunity that spans age, gender, and ethnicity. Any hope for sustainable development must find equal opportunity as its base. Juno starkly highlighted the deep inequality that runs throughout the United States—while it gave rise to discussions about the best Netflix marathons or complaints at the delay to Seamless deliveries, for many it represented much more of a substantial problem.—Hannah Butler