Women in the Science Lab? Distracting! 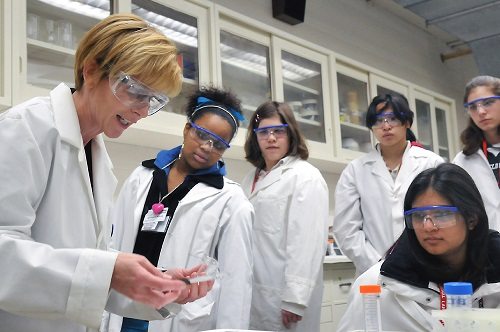 The famous question posed in the movie When Harry Met Sally is whether men and women can have a relationship that does not have any romantic undertones. According to Sir Timothy Hunt, when it comes to men and women working side-by-side in the science lab, the answer to this is an emphatic “No.”

As part of a speech he was making in South Korea, Hunt told the audience “about [the] trouble with girls. Three things happen when they are in the lab: You fall in love with them, they fall in love with you, and when you criticize them they cry.”

Not surprisingly, Hunt’s remark has set off a wave of comments from scientists, both male and female, with Twitter being a focal point. It turns out that Hunt is not just any scientist making dumb sexist comments; he happens to be a Nobel Laureate scientist making dumb sexist comments. Hunt was the co-winner of the Nobel prize in Physiology or Medicine in 2001 for his part in work on the key regulators of the cell cycle. He was also an honorary professor at University College London, an institution that prides itself on being one of the first to admit women on equal terms to men. (Hunt resigned his position on June 10th.)

Almost as soon as he made the comments, the backlash started. Now, Twitter is buzzing with humorous comments, photos, and even a mock Shakespearean sonnet. Under hashtags such as #distractinglysexy, #distractingscientistwomen, and #HeyaTimHunt, derision has been pouring down on Hunt’s head. Many of the postings show women wearing hazmat suits or covered in goose poop commenting on how distractingly sexy they must be.

The response has been swift: University College London has come out with a statement distancing themselves from Hunt’s comments, and the Royal Society where Hunt is a fellow has some members calling for his dismissal. As one Twitter commentator noted, Hunt accuses women of crying when criticized, and yet within a few hours of criticism, he resigns his post. How ironic.

Hunt is not the first Nobel Laureate to exhibit that intelligence in one area does not necessarily guarantee it in another. In a December newswire, NPQ covered the travails of James Watson, who one woman colleague called both one of the most important scientists of the last century but also a “peevish bigot” and a jerk. His comments include not just extreme forms of sexist claptrap but also racist remarks, too. And he does not appreciate fat people, either.

The moral of these stories? Be careful what you say, because someone probably will hear it and social networking will call you to task on it.—Rob Meiksins