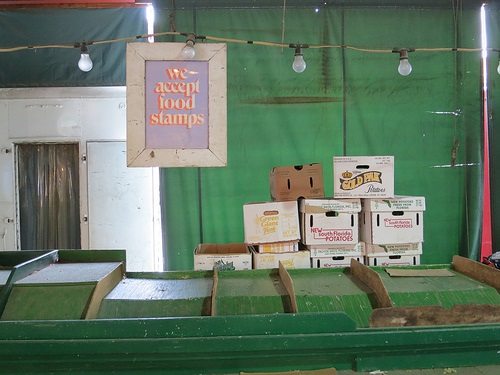 Among the most punitive components of welfare reform from the 1990s was the lifetime ban on food stamps for people who had been convicted of a drug-related felony. That’s right, a lifetime ban. It’s easy to forget how many elements of the Personal Responsibility and Work Opportunity Reconciliation Act of 1996 were punitive or enabled states to be punitive toward TANF recipients, including individual and family caps on assistance, incentives for even more restrictive state benefits, and more.

Gradually, many states have done away with the food stamp ban for drug felons, but ten states still maintain this policy, including Missouri. Writing for the Post-Dispatch, Marie French tells the heart-rending story of Christine MacDonald: blind, out of work, with a newborn son, and waiting for food at food pantries because, due to a drug conviction, she was not allowed to receive food stamps. “You couple finding a job with a criminal record, with having no eyeballs, you’re going to face some societal barriers,” McDonald said to French. “If I would’ve killed someone I could’ve gotten food stamps.”

Now, the Missouri state senate has approved a bill to loosen the restriction, and there are indications that the legislation has bipartisan support in the Missouri house. McDonald has been testifying on this issue since 2008, noting that most people weren’t even aware of the lifetime ban. The Missouri bill would allow people with drug convictions to become eligible one year after their conviction or after their release from prison. Three drug-related convictions, however, ends you up with a lifetime food stamp ban. The bill passed with Republican support, particularly after Senator David Sater added the three-strikes amendment. French reports that four Republican state senators voted against it, including Will Kraus, who voted no because of his contention that the food stamp program has a significant level of waste and fraud already.

Some Democrats acknowledge what McDonald knows, that providing food support helps stabilize individuals and families and reduces the likelihood of relapse. “If we take care, nurture the person, we keep the disease of addiction at bay,” McDonald added. “If you can’t feed yourself or your family, out of frustration you’re going to go back to the drugs, back to whatever criminal acts get the money for the drugs.”

McDonald herself is a case study that a drug conviction need not be a life sentence. Out of jail since 2004, blind since 2006, McDonald now runs a nonprofit called Christine’s Vision, through which she advocates for the homeless, recovering addicts, ex-offenders, and persons with disabilities.

Among the states that maintain this ban are Georgia, Texas, West Virginia, and Delaware. Rather than waiting for a state-by-state removal of this antediluvian policy, Congress could take action and prohibit food stamp bans for people convicted of drug felonies. But it hasn’t acted. Think about our national policy regarding the treatment of people convicted of drug offenses. They may be sent to prison and serve what could be long sentences. But on their release and supposed rehabilitation, the nation says to them, as Celia Cole, CEO of the Texas Food Bank Network, put it, “‘You made a mistake. You paid your debt to society. We’re letting you re-enter society, but you can’t eat?’…It doesn’t make sense.”—Rick Cohen