In 2015, Global Witness reported that the murder of indigenous environmental activists was the highest on record.

But last year was worse.

According to the report, entitled “Defenders of the Earth,”

The data show that the violence is the worst in resource-rich countries in Latin America, but according to National Geographic, “there is little data about the fate of local people trying to protect their land and water in the Middle East, Asia, eastern Europe and Africa.” 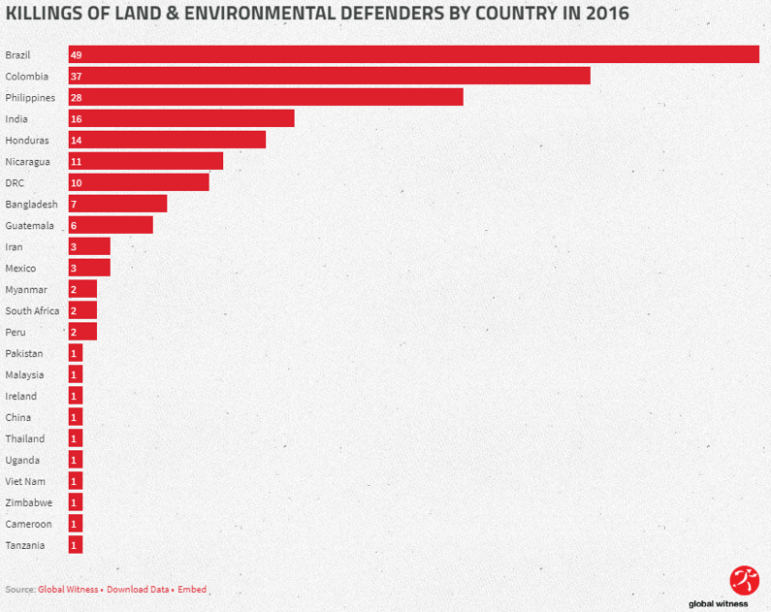 Jamie Kneen, communications and outreach coordinator at MiningWatch Canada, said that some countries have even declared martial law to end protests, such as the Philippines and Thailand. “It’s crazy. It’s completely out of control and hardly anyone knows about it,” he added.

The scramble for exportable resources and the land they come from has motivated violence against protestors everywhere. Reuters reported that “dozens of indigenous people are killed each year in Brazil in fights with farmers and ranchers over land, often in the relatively lawless Amazon region, where hired gunmen have been used to push the indigenous off resource-rich reserves.”

In a conversation with Billy Kyte, campaign leader for Global Witness and co-author of the report, told National Geographic,

Protestors are often attacked for being anti-growth or anti-jobs, when all many of them want is environmentally sustainable jobs and businesses that don’t pollute their air or water. Countries with pro-business governments are where murders of protestors were most common. Killings of forest defenders in Brazil have become more brazen under the new business-friendly Michel Temer government.

One of the things worth pointing out here is that many of the horrible murders that Global Witness has documented this year—murders meant as a direct threat to activism—might have gone almost unnoticed by much of the world prior to their existence. Global Witness, like the Committee to Protect Journalists, are indispensable components of a global civil society. As Bill Moyers has commented, “Global Witness is the backbone of hope for journalism. I mean fearless journalism, tough and independent journalism, journalism that in a world of increasing oligarchy will tell us the truth about money and power and the corruption that is robbing everyday people of their rights and resources…So, yes, the backbone of hope for journalism—and our spine for the future.”—Erin Rubin