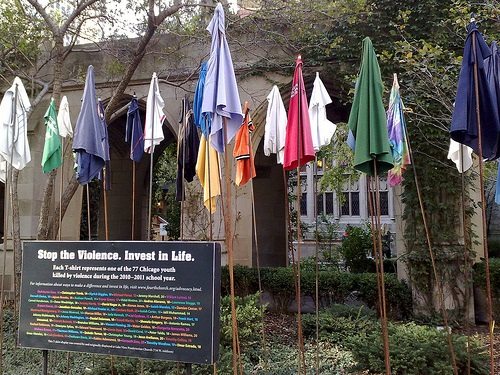 Fourteen people were killed over the July 4th weekend. They weren’t killed in auto accidents or by misdirected Roman candles, but by people wielding firearms. Eighty-two people were shot. It’s the kind of total one might expect in a nation torn by a civil war, not in just one U.S. city over a holiday weekend. It is hard to believe.

At least five of the 14 were killed by police, including two teenagers—14 and 16 years old—who reportedly refused police orders to drop their weapons. According to the Chicago Tribune, many of the wounded are in critical condition, so it is possible that the July 4th tally of deaths due to gun violence may rise. While most of the victims were young, one of the victims was a 66-year-old woman, who was shot in the head as she walked up the steps to the porch of her home.

The news from Chicago was so awful that the national press paid little attention to July 4th weekend killings elsewhere in the U.S. In Indianapolis, a police officer was killed amidst shootings over the holiday. Multiple shootings left at least four people dead in San Francisco. A number of shootings in Long Beach left at least one person dead. Two people were killed in Baltimore over the holiday.

And so it goes: wherever one looks, deaths due to gun violence in city after city. But Chicago is a special case. Chicago Mayor Rahm Emanuel, who had made reducing gun violence a cornerstone of his administration, decried the shootings as “senseless” and “unacceptable.” There is no question that Chicago police superintendent Garry McCarthy is sadly correct that the reason for the unending gun violence in Chicago is primarily due to the proliferation of firearms.

In the wake of the Chicago slaughter, there will be marches, and calls, and candlelight vigils, and pledges of community building, and ceremonies, and on and on. They are all worthwhile, but none will work without getting guns off the streets, pure and simple. If anyone needs any justification for gun control, Chicago’s bloody Independence Day weekend is all that is needed.

But where is the nonprofit sector? The nonprofit sector writ large has nothing in common with the National Rifle Association and its ilk, which have deep-sixed even the most modest of legislative gun control approaches, such as background checks and the banning of weapons that are better suited to battlefields than neighborhoods. Every single nonprofit that has a whit of concern for the health and safety of 14-year-old teenagers and 66-year-old women ought to be outraged by our nation’s self-slaughter, played out in the streets of Chicago. It isn’t a violation of bans on political electioneering for nonprofit employees, board members, and volunteers—as individuals, but en masse—to tell this nation’s feckless and often gutless politicians that the time for reining in the gun terror of America’s cities in now. Enough!—Rick Cohen