A Big No to “No Solicitation” in Colorado Springs 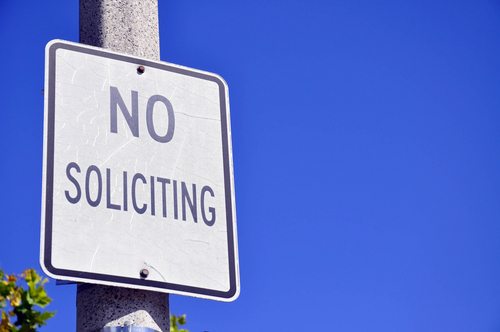 On Monday, the Colorado Springs, Colo. City Council eliminated the city’s controversial “no solicitation zone.” The ordinance had been challenged by the American Civil Liberties Union (ACLU) of Colorado, which had filed an injunction to stop it on the assumption that it would infringe upon free speech rights. In December, a federal judge ruled that the “zone” was unconstitutional. The city’s ban on solicitation within 20 feet of a residential or business entryway remains in place. In tandem with the recent installation of surveillance cameras, the Colorado Springs city attorney says the city has accomplished the goals the “zone” was meant to address. City Attorney Chris Melcher told Fox21:

“Both the passage of the new 20-foot rule and the installation of the cameras downtown have led to a significant improvement in the safety, comfort, and attractiveness of our downtown…In just their first few months the cameras have successfully led to several arrests, and the city’s focus on stopping persistent and unwanted solicitation in the downtown [area] has greatly reduced that activity. These two initiatives have accomplished most of the purpose of the no solicitation zone, and we, along with the downtown merchants, downtown residents, and our entire community, are pleased with the progress…At this time it does not make sense for the city to spend additional resources on the ACLU challenge, particularly given that the federal court was not sympathetic to our arguments and additional courts have not yet supported these zones…By withdrawing the no-solicitation zone now, before a trial or a ruling on the merits, the city will conserve resources and retain the option in the future to revisit a zone if it’s needed for the benefit of our community and our downtown.”

In a statement, the ACLU of Colorado commented, “It was a tremendous overreach to try to forbid any and all solicitation in a huge 12-city block downtown area. The city was unable to cite a single case in which a court had upheld such a breathtakingly broad restriction of speech…We are delighted that the free expression rights of musicians, theater performers, nonprofit fundraisers and others will be restored and respected.” –Ruth McCambridge