A Library Where The Lights Are Always On 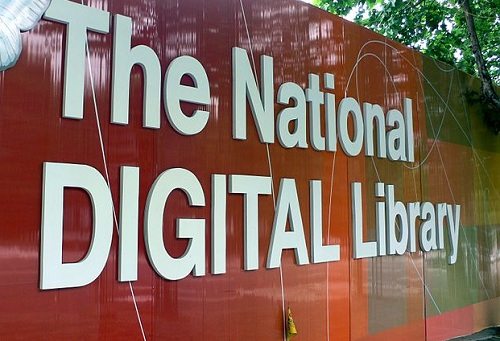 According to the DPLA, the vision for a national digital library isn’t new and in fact “has been circulating among librarians, scholars, educators, and private industry representatives since the early 1990s.” Although some library collections have gained notice for digitizing their collections, and Google has outlined an entire Library Project, the government- and foundation-supported DPLA aims even higher by bringing “different viewpoints, experiences, and collections together in a single platform and portal.”

Because digitization means access, the creation of the DPLA means that individuals anywhere with an Internet connection and organizations of basically any size can now share resources on a more level playing field. Emily Gore, DPLA’s director of content, told PRI, “The goal is to use the technology we do have, including better bandwidth, to pull things together in one discoverable place, so that small historical societies and other small institutions that contribute to these aggregation points…can then be shared at a larger scale.” Refining the definition of “content” beyond just books, Gore added that for DPLA the term already incorporates “manuscripts, artworks, photographs, streaming video (and) audio.” As a teaser to enliven the current collection of 2 million items, Gore explained that daguerreotypes from George Washington and Abraham Lincoln, as well as the video footage of the Freedom Writers, are already available online.

Visiting Stanford University scholar Lucy Bernholz planned to attend the kickoff event last week at the Boston Public Library before it was cancelled as a result of the bombing, and blogged about her close following of the growth of the DPLA concept. After first reading a 2010 newspaper story about the project, she later joined a 2012 planning meeting in San Francisco for stakeholders where she recalled, “I could barely understand the jargon of the librarians and information scientists, but left with a big smile on my face.” In technical terms, Bernholz refers to the new collection as “an untouchable virtual repository of metadata.” In simpler terms, she describes it as “forward looking,” with “the purpose of preparing for a future of digital everything.”—Anne Eigeman