A Market Problem: Museums Adjust to Huge Crowds in Europe 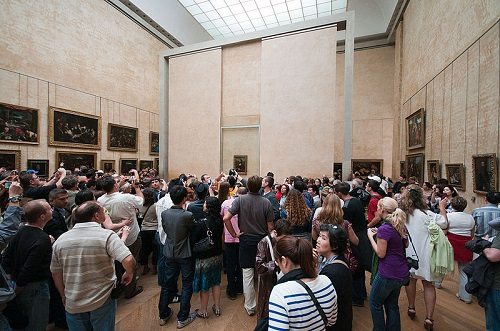 An article in the New York Times informs us that while we all might have had our own problems with crowded museum venues, the Louvre and other museums across Europe are seeing record numbers that are forcing them to make major adjustments. Described in this article are long lines and patrons packed sometimes 12 deep attempting to view art that is probably better enjoyed more softly. What to do?

The Louvre is the most popular art museum in the world, recording 9.3 million visitors last year, and the British Museum was second with 6.7 million. As reported here, in 2013, the Vatican Museums set a record with 5.5 million visitors, a number expected to rise this year to 6 million. The large numbers seem to be driven by countries with emerging middle classes, primarily those in Asia and Eastern Europe. Many museums do not wish to limit access altogether and this makes dealing with the hordes a core function of these institutions.

In some cases, the artwork itself becomes subject to untenable conditions. The Vatican, for instance, is trying to control the effects on Michelangelo’s frescoes of the humidity generated by an expected 2000 visitors at a time by installing a new climate-control system in the Sistine Chapel. Tomaso Montanari of the Federico II University in Naples says of the Uffizi, which does not yet have climate control, “It seems like a tropical greenhouse—you can’t breathe.” In a telephone interview he said, “If a cinema has 100 places, you can’t let in 300 people. If there’s a fire, it’s a tragedy.”

Many museums are offering timed tickets, of course, and some are expanding their hours and days of operation and redesigning space. And some, including the Sistine Chapel, are offering virtual tours. I will keep my old fashioned opinions to myself on that.—Ruth McCambridge