Last Tuesday, more than two million North Carolina voters, 55 percent of the total, said “yes” to a state constitutional amendment that will require people to present a valid photo ID in order to vote. An earlier attempt to impose the same requirement through legislation had been ruled unconstitutional by a federal court, prompting North Carolina’s Republican-dominated legislature to place the measure on the November ballot. Just days after the election, a recently formed nonprofit, Spread the Vote, announced it was springing into action to make sure this wouldn’t keep eligible voters from participating in the next election.

Voter ID requirements are one of several contentious efforts to suppress votes. Thirty-four states have some kind of voter ID law in place, with 22 requiring a state-issued form of identification. The stated rationale is that ID prevents fraud and qualified voters can easily meet the requirements. Opponents see it as a solution to a nonexistent problem and one that’s really designed to limit the power of the poor and communities of color, for whom the cost and difficulty of obtaining the necessary documents present a high barrier.

Spread the Vote’s approach is not to engage in legislative struggles to overturn these laws. Rather, it seeks to increase voter turnout and help voters meet the requirements that now face over 21 million otherwise qualified voters. Spread the Vote sees the following barriers that must be surmounted:

The voter must gather documentation—things like birth certificates, naturalization papers, social security cards, marriage certificates for women who have changed their names, and proof of residence. Original copies are usually required, which can cost money to obtain. The poor face the challenge of paying for all this paperwork. The homeless lack the residential address required to register. Elderly voters who were born in rural areas may have never been issued birth certificates, and must make their way through an endless bureaucratic maze in order to prove their identities. Students and young voters may find their dormitory addresses are not accepted. Native Americans who live on reservations may find that PO Boxes are not accepted either.

Within days of learning the election results, Spread the Vote announced it would expand its current five-state operations to include North Carolina. It will hire a local staff director and, by January, begin recruiting the volunteers to reach those whose right to vote is at risk. According to ABC11, “volunteers will be going to senior-living facilities, homeless shelters, and college campuses—assigning mentors to help people not just get IDs but also the vital records required to get the ID, such as birth certificates or social security cards.”

Spread the Vote Founder Kat Calvin said, “IDs are hard to get. I mean they’re not free. You can’t just walk into the DMV and get an ID. You have to pay for the ID. You need birth certificates…Spread the Vote pays all the costs required to get an ID. We’ll pay for documents. We’ll pay for the ID itself. And we pay upfront. It’s not reimbursement. So that’s not something someone needs to worry about when they work with us.”

The challenge that Spread the Vote has taken on is large, and their 2018 results were quite small. According to Fortune, the organization “spent $770,000 this year to help more than 600 voters in Georgia, Texas, Tennessee, Virginia, and Florida obtain IDs.” For 2019, they have set an aggressive goal of getting IDs for 10,000 voters and are expecting to spend more than $3 million in that effort.

Calvin, perhaps recognizing that at more than $1,000 per individual, their program is costly, added another perspective to their value proposition in comments to AXIOS: “IDs are about so much more than voting. Our clients use their IDs to get jobs, housing, medical care, food at food banks, nights at shelters, and so much more.”—Martin Levine 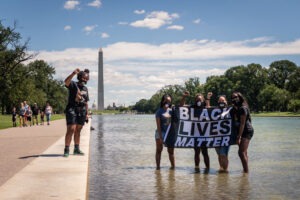