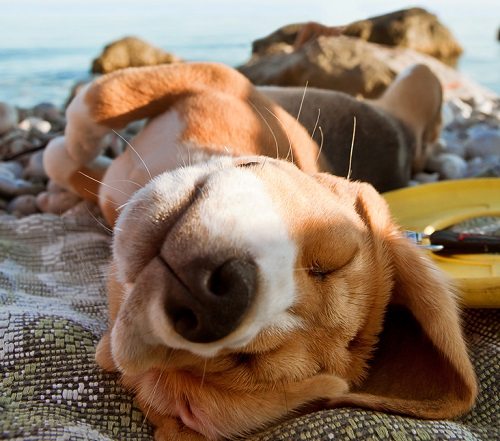 Companies often use beagles for chemical and pharmaceutical testing, but CBS’s Los Angeles affiliate reported on a local group giving some of those dogs a life outside of a cage and in “forever homes.”

The Beagle Freedom Project saves beagles used in research labs and has rescued more than 300 from across the country since 2010.

The TV report tells the story of Riley, a three-year-old dog who met his family in July. He first showed some signs of being a lab dog, but he quickly learned the ropes around the home.

What goes on in many labs is usually well hidden from the public, although the animal rights advocacy group PETA has made its name showing videos from investigations; in one, a worker is shown force-feeding a beagle Oxycontin. Another investigation showed beagles suffering mental trauma after years of confinement.

“It’s important to note that there is no experiment on dogs that’s illegal. Experiments have to be approved by committees within a laboratory, but nothing is against the law, so they’re put through all kinds of cruelty,” says a PETA spokesperson, adding that most dogs end up euthanized.

Dogs bred for the lab rarely end up in a loving home, mostly because the labs want to keep a low profile—they understand the power that anti-cruelty advocacy campaigns can have on public opinion. While there is strong support for the medical necessity of such experimentation, the details of it repulse the public.

The U.S. Department of Agriculture, the agency in charge of overseeing animal testing, turned down CBS’s request for an interview.—Larry Kaplan