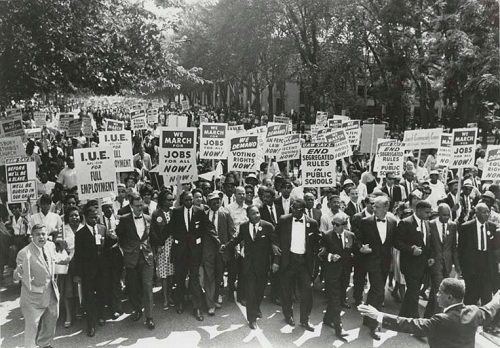 Fifty years ago yesterday, the March on Washington for Jobs and Freedom inspired and unified millions. That it rose above the hatred and vitriol that was gripping the nation made it all the more powerful. Dr. Martin Luther King, Jr.’s, iconic “I Have a Dream” speech made it clear that the civil rights movement was a struggle for more than the repeal of hateful laws and the reversal of backwards thinking. The movement was about creating economic opportunity and democratic engagement for all Americans, regardless of skin color.

Foundations and philanthropists played a key role in supporting the civil rights movement. Using grantmaking institutions, passionate individuals could engage what were controversial issues and advocate for change. The Field Foundation adopted the equality banner early. Founded out of a desire to relieve Depression Era suffering, it began promoting integration in the 1950s, and its work included an impressive collection of victories. For instance, their 1967 report on hunger in poverty afflicted southern communities paved the way for programs that have helped millions live healthier and more productive lives.

Field was not alone. Many more organizations developed efforts to promote equality. The Ford Foundation was a key supporter of the NAACP in the 1960’s and provided vital funding for its Legal Defense and Educational Fund (LDF). Founded by Thurgood Marshall in 1940, the LDF led the charge on school desegregation and defended activists. As schools began opening their doors to people of color, the Rockefeller Foundation made numerous grants in support of access to higher education through scholarship programs at newly integrated institutions and Historically Black Colleges and Universities.

As a nation, we must challenge ourselves to reflect on what it means to be a thriving democracy as well as the important role that foundations have played in advancing the common good.

Using the power of networks, institutions, affinity groups, individual donors, and leaders continue to work toward the betterment of society at many levels. “Organizations such as ours are very much engaged in ensuring equitable outcomes,” says Foundation for the Mid South President Dr. Ivye Allen. “Philanthropy today is engaged in ensuring that the most vulnerable are included, and through our grantmaking we are trying to promote people and strategies who can help us move the numbers on these issues.”

This message of philanthropy’s potential has been embraced by funders of all types. Groups like the W.K. Kellogg Foundation are working to bridge gaps that remain in our society. Over five years they will grant $75 million through their America Healing Initiative, which seeks to help divided communities find common ground on public health, juvenile justice, and economic success. Further efforts for this kind of grassroots engagement can be seen through the Marguerite Casey Foundation’s support of the South by Southwest Experiment. This program is connecting local Black, Hispanic, and Native American community leaders so that they can find common solutions to the issues they face.

By supporting causes like youth financial literacy, community wealth creation, and domestic violence prevention, foundations are still tackling many of the pressing issues of the day and engaging in deep change to improve outcomes for everyone. The African American Leadership Forum (AALF), which is supported by the Northwest Area Foundation, and Black Male Engagement (BMe), funded by the Knight and Open Society Foundations, are two examples of programs that are leveraging the success of individuals to lift entire communities. Similarly, work such as the Boys and Men of Color Initiative helps to keep young men “healthy, connected, and on the track to succeed.”

Our society faces many challenges, not just in the space of racial equity but across a wide array of issues. However, certain leaders within the philanthropic and charitable sector are rising to these challenges and presenting innovative solutions. These examples represent a few significant achievements and demonstrate the tremendous assets waiting to be deployed in our communities. Fifty years ago, Dr. King said that “we refuse to believe that there are insufficient funds in the great vaults of opportunity of this nation.” And as we mark his words, we can see that he was not wrong. And following his example, we should dream to go further still in the next fifty years.

Vikki N. Spruill is president and CEO of the Council on Foundations.

Susan Taylor Batten is president and CEO of the Association of Black Foundation Executives, having joined there in 2009.