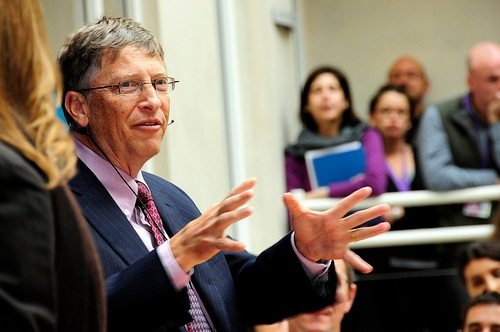 Yet another word has been added to the lexicon of nonprofits and foundations: “philanthropreneurship.” London Business School marketing professor Rajesh Chandy uses the neologism to refer to “the skills [that] enabled people to make their fortunes, which are often the ones required to solve apparently intractable problems.” Chandy identifies Pierre Omidyar, Jeff Skoll, Richard Branson, Steve Case, and, not surprisingly, Bill Gates as exemplar philanthropreneurs. Referring to Bill (and Melinda) Gates, Chandy says that they show how philanthropists “can bring their skills to bear in a more productive way than simply bestowing money on a problem…They bring their entrepreneurial chutzpah and business thinking along with their cheque books.”

“Working in large networks, these high net worth individuals can pool the resources and expertise of a worldwide network of social entrepreneurs with the collective capacity to achieve global goals,” Chandy writes. “The act of grant-making is more collaborative than it has ever been before. The cash granted is no longer invested in things, but in the people who make things happen.”

“Together,” Chandy writes, “[philanthropreneurs] are more than the sum of their parts.”

The acolytes of these philanthropreneurs, the writers who tend to see anything critical of social entrepreneurs as “tall poppy” jealousy, undoubtedly agree that these philanthropists have been endowed through their work experience and money-making with greater insights into social problems, leading to “solutions that are impactful, scalable, and sustainable.” There are online journals that publish regular hagiographic profiles of these high net worth philanthropists and their leadership in the nonprofit and foundation worlds. They downplay, however, scalable philanthropic disasters of philanthropreneurs, such as the Gates Foundation’s support of inBloom, or the ideological biases in some philanthropreneurs’ choices of solutions, like the Gates Foundation’s overwhelming support for mechanisms of school privatization.

For all of the suspicion in our society of people of wealth, there is a persistent theme in that people of wealth, people who have earned millions or billions in the business world, are somehow better equipped to devise solutions to social problems than the rest of us. How many in the nonprofit and philanthropic realms really, deeply, secretly believe that plutocracy is superior to democracy? How many quietly think that we would all be better off if we were ruled, officially in government or more broadly in society, by philosopher kings and queens, the rulers of the ideal state envisioned by Plato? How many think that society—or, more specifically, the nonprofit and philanthropic sectors—would be better off if guided by Chandy’s philanthropreneurs?—Rick Cohen