NPQ, Propel Nonprofits and FMA recently launched a new collaborative initiative called the Financial Commons. The Financial Commons intends to provide resources to nonprofits of all shapes, sizes, and types to help them build their capacities for the kind of agile financial strategy and management our complex environment calls on them to enact on a regular basis.

Core to the design of the Financial Commons is the collection and curation of the vast intelligence of the field, so before our online event on November 30th, NPQ surveyed registrants about their nonprofits’ financial and related programmatic realities of 2020. Five hundred and seventy-two people responded, and the data, while perhaps not surprising, are nonetheless stark—a reminder of the staggering degree of difference and adaptation across the nonprofit sector this year. Here, we share some key findings from the survey conducted last week.

1. A Confluence of Powerful Forces 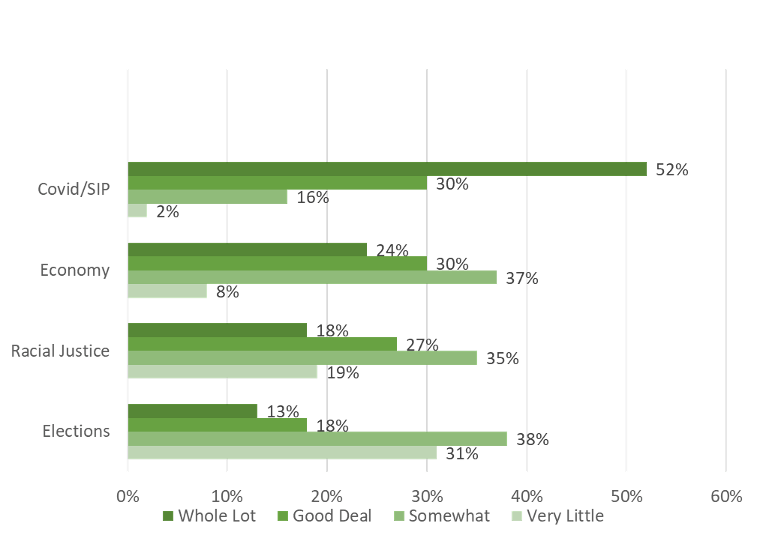 Our first question asked the degree to which nonprofits had been affected by each of four forces over the year. The answers are below.

What has made 2020 unprecedented, of course, is the confluence of significant forces affecting our communities, employees, and organizations: COVID/Shelter in Place (SIP), the economic downturn, the accelerated movement for racial justice, and mobilization for a critical election. In the chart above, when we combine “whole lot” and “a good deal” to represent a substantive impact, we find that COVID/SIP was the most-far reaching and intense force, with 82 percent of organizations. The economic downturn is next, with 54 percent, and then the accelerated movement for racial justice with what some of us might consider a disappointing 45 percent. Finally, we have the election with 31 percent of organizations reporting a substantive impact.

We then asked how many of the groups we surveyed had availed themselves of a Paycheck Protection Program (PPP) loan. It is important to recognize as we go ahead that some groups might be counting these already as grants in anticipation of forgiveness. This high level of their use is not surprising in comparison with other surveys.

This group’s utilization, at seventy percent, was clearly significant. For more on PPP loans, please see the FMA toolbox.

3. Revenue Performance Better than Feared but Varies Greatly by Field and Program Model

As we learned in the Great Recession, and documented in “Nonprofits in Recession: Winners and Losers,” parts of the nonprofit sector perform countercyclically to the economy, as both demand for their services and commensurate income from government, philanthropy, and/or other sources increase. Other fields are definitely more prone to decline. This appears to be the case in 2020, too. In the chart below, we see that 56 percent of respondents reported their income levels as flat or higher compared with last year. Again, note that the PPP loan may be already counted as revenue.

But once we drill into subsectors, we begin to see important variation in income performance. The double hit for many arts organizations, for instance, is the inability to host congregate activities due to COVID/SIP on top of the economic downturn. In the chart below, we compare the reported income performance of three sub-sectors: arts, human service, and advocacy.

Respondents report adaptation in both program delivery and fundraising in very high numbers. We asked if groups had any of these three experiences with a program or a fundraiser in 2020: put on hiatus, innovated so it could be delivered, and/or permanently discontinued. 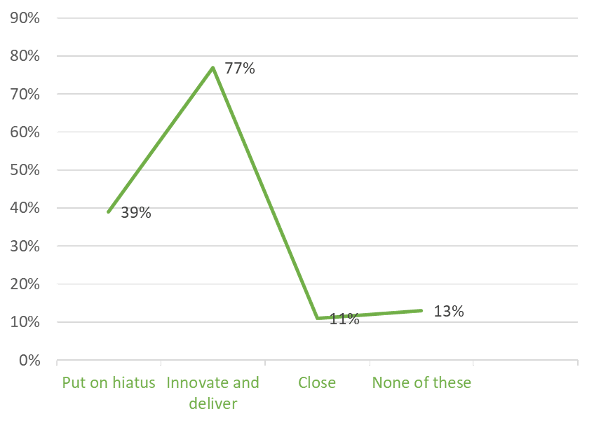 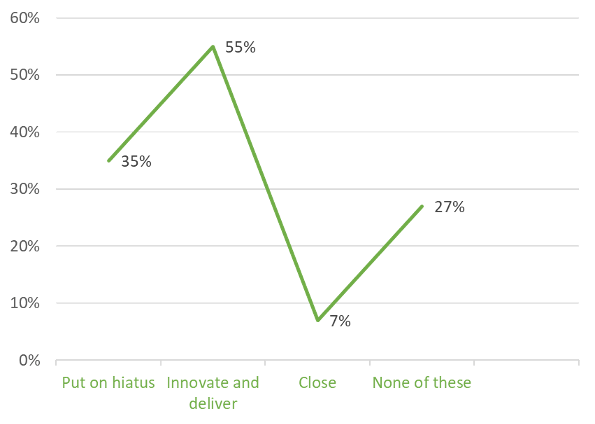 This quick survey has just scratched the surface, but this kind of specific, very current information is part of what the Financial Commons intends to include in what it provides to nonprofits and public and private funders. We hope to ask the right questions to elicit the financial information you really need from peer networks and experts. In one case, this might have to do with management of a “perfect storm” of impossible circumstances; in another, it may have to do with the uses of debt or cash flow.

So, although 2020 has indeed been a year like none other, it also holds lessons and intelligence nonprofits should be able to build on in the future. The bigger our base of intelligence, the more accurate we can be in making sure that the site meets your needs. This means you, so sign up today to be put on the list!

Fidelity Charitable Trustees is backing the preliminary development phase of this project with a grant awarded to Propel Nonprofits.