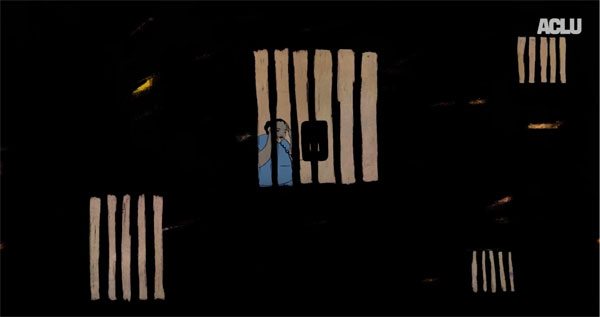 The ACLU premiered three animated shorts on mass incarceration at the Sundance Film Festival this past Saturday. Presented by the ACLU’s Campaign for Smart Justice, the trailer for the new shorts is one of many videos at the ACLU’s YouTube channel.

Told through the first-hand stories of formerly incarcerated advocates Lavette Mayes, Jason Hernandez, and Johnny Perez, this is the first time that the ACLU has screened original content at Sundance.

Mayes previously wrote for Truth-Out.org about how she spent 14 months in a Cook County, Illinois, jail because she could not afford bail. Hernandez authored several articles for the Huffington Post about his 15 years behind bars for a nonviolent drug offense, and the stigma attached to people with criminal records in the job market. And much of Perez’s work focuses on the emotional toll and inhumanity of solitary confinement, which he endured for three years.

The costly impact of imprisonment and the trauma experienced by incarcerated people, their families, and communities are subjects of great interest to NPQ readers. NPQ articles include one about a museum exhibition and another about a $100 million gift to create the Art for Justice Fund, “a movement to end mass incarceration.” A monumental contribution to building awareness about the realities of mass incarceration was law professor Michelle Alexander’s book, The New Jim Crow: Mass Incarceration in the Age of Colorblindness, which gave eloquent and urgent expression to the realization that the war on drugs was a continuation of the race war by other means.

Udi Ofer, director of the Campaign for Smart Justice, said, “We are marking the one year anniversary of the inauguration of Donald Trump, and the resistance that it has launched, by partnering with Sundance to lift up stories of Americans who face injustices due to government policies. Ending mass incarceration is about reckoning with the damage it has done to millions of people, particularly families living in underserved communities across the country.”

The ACLU has long appreciated Sundance showing documentary and fictional films that tell important stories about civil liberties. A film about Supreme Court Justice Ruth Bader Ginsburg, who founded the ACLU Women’s Rights Project in 1972, also premiered at this year’s festival. By leveraging their strengths this year as one of the storytellers, the ACLU helps the country understand the scale and brutality of our prisons, a moral scandal of American life.

Many rage against these statistics. The ACLU created stories that attempt to inspire and compel social change by offering a different kind of calculation. Their three animated shorts show the human cost of caging so many American citizens for so many years. We can only hope that this critical work receives a wide release to the American viewing public.—Jim Schaffer