In August, Home Health Care News reported that around 34,000 home health care workers in Washington State won increases in their contract that will top out at $16/hour in 2019 when the contract ends. The contract also doubles the retirement funding from the state, provides for additional paid time off, and rewards advanced training with additional compensation.

Of the 2.2 million home care workers in the United States, one in four live below the federal poverty line, according to a report from the Paraprofessional Healthcare Institute of New York. Because of inconsistent hours and low wages, home care workers bring home a $13,300 annual income on average; more than half depend on public assistance of some kind. These factors combine to make the field unattractive to workers with other options, right at the time when the number of Americans over age 85 is projected to triple over the next 35 years.

It’s worth restating that around 90 percent of home care workers are women, and more than half are people of color, with 25 percent born outside of the United States.

Nonprofits have the extraordinary opportunity in all of this to brand themselves even more strongly as the workplace of choice, and that is important in a field where workforce problems have been a growing issue.—Ruth McCambridge 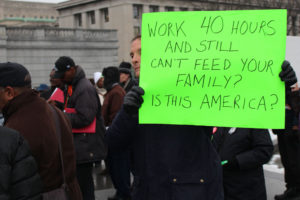