Aid to Ukrainian Civil Society May Be Highest Priority 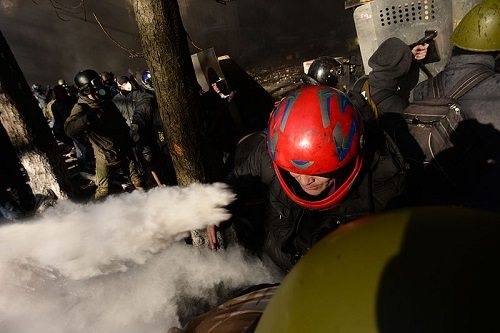 Obviously, the U.S. can only do so much regarding intervention in Ukraine, but the situation in this country on the border of Russia is neither unprecedented nor inconsequential. Vladimir Putin’s military aid to help ethnic Russians split the Crimean peninsula away from Ukraine—as shown below, the Russian English-language news network RT is already showing Crimea as part of Russia—is similar to the strategy used against Georgia, supporting Russian nationalist secession elements in Abkhazia and South Ossetia and against Azerbaijan with a similar strategy in the area of Nagorno-Karabakh. (Note: Yesterday, the Crimean parliament voted itself independent ahead of a referendum scheduled for next week on whether it should secede from Ukraine, declaring the creation of the “Autonomous Republic of Crimea.”) 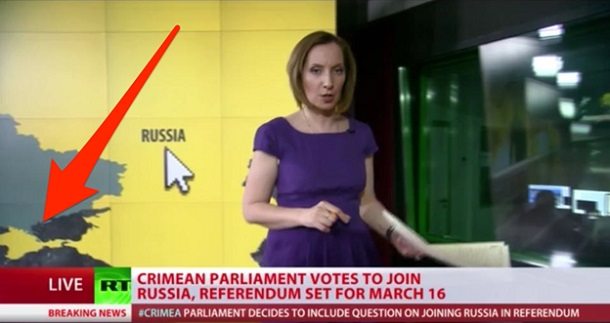 Other countries bordering Russia are apprehensive, notably the Baltic nations, where there are also large Russian ethnic minorities, some due to their long occupation by Stalin’s USSR. Last week, the Russian ambassador to Latvia proposed making it easier for ethnic Russians in that country to obtain Russian citizenship (Russia already hands out Russian passports to them) in order to “save the Latvian noncitizens out of poverty by giving them citizenship and a pension without having to stay in Russia.”

Devex’s Jones sees the EU offer of €11 billion (roughly $15 billion) in economic and development assistance for Ukraine as important to “stabilize Ukraine’s faltering economy and aid the country’s interim government.” The Obama administration followed the EU decision with a $1 billion aid package, notable since USAID’s 20 year history of aid to Ukraine has been only $1.8 billion and total U.S. aid to Ukraine from all federal agencies has run in the range of $100-200 million per year from fiscal year 2006 to 2013 (planned, not necessarily obligated or spent); in comparison, over a 20 year period since 1991, the EU provided Ukraine with €3.3 billion in grants and €10.5 billion in loans. The new $1 billion from the U.S., however, is loan guarantees, presumably for the National Bank of Ukraine, “aimed at helping insulate vulnerable Ukrainians from the effects of reduced energy subsidies.” That’s a probable reference to Russian subsidies for gas, a tactic that Russia has also used before. The EU assistance, unlike the U.S. package, is a mix of loans and grants:

Both the EU and the U.S. have also pledged to provide technical assistance for democratic reform in Ukraine—in the words of the White House, “technical assistance to train election observers, help bring electoral processes in line with international standards, and promote robust participation by civil society organizations and a free and independent media.”

Economic development, humanitarian assistance, energy subsidies, and more will all probably be appreciated by the Ukrainian people. What may be most at risk in the wake of the violence unleashed by the Yanukovych government against the protesters in the Maidan, the invasion of tens of thousands of Russian troops in Crimea, and the difficulties that will emerge if military action increases is the future of Ukrainian civil society. Governments and philanthropists are facing a fluid, unpredictable situation in Ukraine, making it hard to pinpoint what they should do. Some pertinent questions for government and private donors might be these:

There is no easy algorithm for figuring out how governments, foundations, and individual donors might send aid to Ukraine.—Rick Cohen