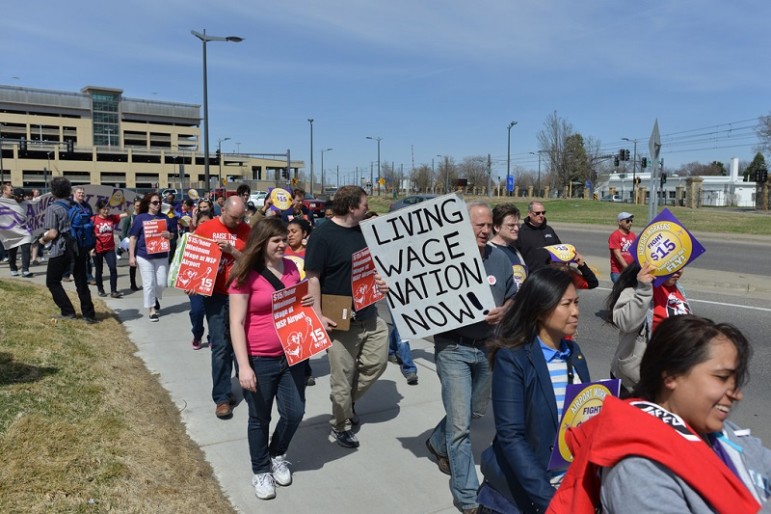 In Chicago, Boston, New York, Newark, and at least eight other U.S. cities yesterday, airport workers staged protests for higher pay. Many carried signs with pictures of the Reverend Martin Luther King, Jr., and some came ready for civil disobedience and arrest.

MLK’s support of striking sanitation workers in Tennessee was evoked across the country. “[Dr. King] was an advocate of civil rights and workers’ rights,” said Gertrudis Lopez, a cabin cleaner at Newark Liberty International Airport. “If Dr. King was alive today, he would stand with airport workers like me who are fighting for dignity and a living wage so we can support our families.”

The demonstrations were backed by SEIU, which has organized the national campaign for $15/hour wages for fast food workers. This campaign demands a $15/hour base wage as well, along with benefits and job protections. The workers in question—terminal and cabin cleaners, terminal security personnel, baggage handlers—are not employed by the airlines, but the airports.

In New York, Governor Andrew Cuomo, who is calling for a $15 minimum wage for all New Yorkers, wrote an opinion piece in the N.Y. Daily News supporting the workers’ demands. It read, in part, “While growth at Kennedy, LaGuardia and Newark continues to take off, more than 12,000 hardworking men and women at these facilities remain grounded, barely scraping by on the minimum wage with a shrinking paycheck that just doesn’t cut it anymore.”

He also pointed out that a full-time airport worker makes $21,000, well below the poverty line and insufficient to pay rent in the NYC metro area.—Ruth McCambridge