Alameda Loses the Rockefeller Foundation Grant It only Just Received 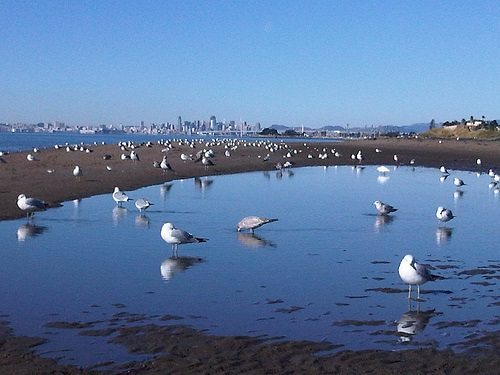 What is a “resilient city”? Whatever it might be, in the Rockefeller Foundation’s 100 Resilient Cities program, it no longer includes Alameda, California. The Rockefeller-funded program, with a grant review panel including former president Bill Clinton, had selected Alameda for a $1 million two-year grant, with a purpose described in December by city manager John Russo as to “help the city continue an ongoing effort to help the city weather an earthquake, fire, tsunami or other disaster.” A few months later, Alameda learned that it lost the grant it had only recently been told it was receiving. The explanation, according to an email from the director of 100 Resilient Cities, Michael Berkowitz, was that “it is clear to us that Alameda’s strategy is incompatible with 100RC’s vision for our network of cities.”

For nonprofits and foundations, that is an unusual sequence of events. It could be that Rockefeller discovered that Alameda’s actual resilience strategy did not comport with what it submitted as its grant application, though one would have expected that the foundation’s due diligence process would have tested the substance, depth, and commitment of the city’s proposed strategy. It could be that the Rockefeller Foundation had second thoughts or cold feet about some aspect of Alameda’s strategy or politics. Or it might have been neither.

The 100 Resilient Cities website defines building resilience as “making people, communities and systems better prepared to withstand catastrophic events—both natural and manmade—and able to bounce back more quickly and emerge stronger from these shocks and stresses.” Alameda was one of the first 33 cities for the program, but the 100 Resilient Cities website has quickly been amended to eliminate Alameda in its list of grant recipients and to reduce the count to 32. The remaining 32 are international and high profile, with the likes of Bangkok, Da Nang, Christchurch, Melbourne, Durban, Dakar, Mexico City, Rio, Glasgow, and Rome—and, interestingly, Ashkelon in Israel and Ramallah in Palestine.

With Alameda off the list, the remaining North American grant recipients are Boulder, El Paso, Jacksonville, Los Angeles, New Orleans, New York City, Norfolk, and three other larger Bay Area California cities: San Francisco, Oakland, and Berkeley. Berkeley’s program seems to include strategies “to deliver critical city services for seven days without outside power in the event the region experiences a major outage” and “for a distributed energy microgrid to power buildings should the electric grid fail.” Oakland’s program apparently is built on “groundbreaking community partnerships…[for] effective community-based climate resilience planning.” San Francisco’s builds on the “city’s innovative use of financing and building codes has dramatically improved building safety, and their use of social media to educate and motivate the public.” What might have done in Alameda, the fourth of the Bay Area cities selected by Rockefeller, so abruptly?

It may have been over a disagreement between Rockefeller and Alameda over what appears to have been a core commitment of each funded Resilience city, the authority to be given a new “chief resilience officer.” In a statement quoted in the Alamedan but not attributed to a specific foundation or program representative, the “crucial” resilience officer is meant to be a mandatory component of each city’s program: “The importance of such a silo-busting role is why 100RC committed to fund the (officer) for each member city for two years.” Back in December, the Alamedanattributed to Russo a statement that the “resilience czar’s” role would be to put together and execute a plan that would help the city get back on its feet after an initial disaster response (Alameda has been long concerned about dealing with a possible tsunami). As described by a Rockefeller vice-president, Neill Coleman, “We know this person will need to be a networker, a connector…We also expect them to play the role of an evangelist for resilience thinking.” Half a year earlier, Rockefeller president Judith Rodin made it clear that the key to the foundation’s funding was paying for “Chief Resilience Officers” at the heart of the program. A disagreement over the concept and power of a CRO seems likely to have been the instigation of the Rockefeller reversal.

As of mid-March, the Guardian had published a piece about the activities of the four Bay Area winners of the Resilient Cities grants, including a two-day seminar involving all four at the Presidio on topics such as a rising sea level, seismic events, and wildfires. Most of the article addressed the programs and initiatives of the three bigger cities, referring only to Alameda as “quaint and low-profile,” with no reference to any of Alameda’s resilience strategies. Only a few weeks after the Presidio meeting, Alameda was on the outside looking in, informed that the Rockefeller grant was no longer. There’s a story here for sure. NPQ would love to hear from the principals in this dynamic, especially from the small city of Alameda, to learn about their experience of interacting with a high profile foundation initiative.—Rick Cohen