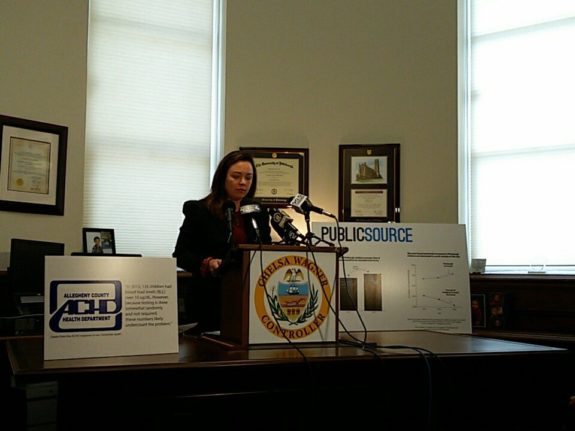 As a result of news coverage about lead poisoning, Allegheny County’s Health Department (ACHD) announced the formation of a new task force. According to the Pittsburgh Tribune-Review, “Allegheny County is launching a lead task force to consider policy changes and analyze county data, Health Department Director Dr. Karen Hacker announced at a news conference Monday. The announcement followed several media reports on the county’s lead problem, including a Trib story revealing the county has rarely imposed penalties on landlords who take months to abate lead paint in properties where poisoned children live.”

ACHD may be operating in crisis control mode, since the details of the task force have yet to be defined. The fact that County Executive Rich Fitzgerald will be offering more details next week is a sign that the media have attracted the attention of the political class. In another strange twist, ACHD held an “informational presentation” at the county council meeting on Wednesday—without posting a public notice first.

The Tribune-Review also announced that the County Controller’s office would conduct an independent audit of the Health Department programs related to lead poisoning. Allegheny County Controller Chelsa Wagner cited stories prepared by Pittsburgh’s Public Source, an investigative news organization that provides Pennsylvania citizens with in-depth information, as motivating the audit of ACHD. According to Public Source,

Wagner based her claims, in part, on a report PublicSource published last week that pointed out flaws in the health department’s data and the methods it was using to collect the data. That story showed a correlation in a slight rise of elevated blood lead levels among Pittsburgh children who were tested and the timing of a chemical switch made by the Pittsburgh Water and Sewer Authority in April 2014.

The political spotlight is probably due in part to the fact that next week is the primary election for mayor and council in Pittsburgh. Pols don’t want to appear helpless in the face of many questions about possible lead poisoning risks. Mayor Peduto, who is expecting to win the Democratic primary against two opponents, has signaled that free water filters are still on offer to Pittsburgh households. This news comes in the wake of revelations that the Pittsburgh Water and Sewer Authority (PWSA) hired the same contractor as Flint, Michigan, to operate their water system in 2012 and got many of the same results as Flint. Mayor Peduto has pledged to reorganize the PWSA, while his primary opponents claim it’s “too little, too late.” The big question for Pittsburghers is whether lead poisoning will survive the primary as an issue.

The current stories in the Tribune-Review and from Public Source expand upon the issues addressed in the earlier “Hidden Poison” series, which primarily looked at the problem of lead in the drinking water. Last week, the Tribune-Review featured a story on ACHD’s failure to shut down homes where lead dust caused a child to be poisoned and where the owner failed to remove the lead from the property. Under state law, these homes should be “placarded” to warn tenants against renting there. The Tribune-Review article notes that the names of owners and addresses of the poisoned properties are considered protected information under the Health Insurance Portability and Accountability Act (HIPAA). The article also focused attention on the low level of lead testing in children in Allegheny County.

ACHD Director Dr. Karen Hacker challenged some of the facts in the Tribune-Review and Public Source stories but didn’t provide specific examples.

To a great extent, the lack of clarity and transparency about data and procedures is at the root of the problem of public accountability for lead poisoning. The Public Source article, “How dangerous is Pittsburgh’s lead problem? The data is contradictory and the damage could be worse than officials say,” tells the frustration of dealing with partial and faulty data coming from the ACHD.

The number of tests confirming elevated lead levels in Pittsburgh children younger than six fell from 49 to 43 from 2013 to 2015. However, during that same time, the number of lead tests conducted in the city fell by more than 1,000, from 4,428 to 3,412, meaning that the total percentage of children in Pittsburgh with elevated lead during the time of the chemical switch slightly increased, from 1.11 percent to 1.26 percent.

Got that? Test fewer children, find fewer cases…but a higher percentage of poisoned children among those tested. No wonder citizens are confused about the scope of the problem.

Pittsburgh’s media outlets are not alone in trying to penetrate the public health obfuscation around lead poisoning. What is clear is that “the lead system” can break down at many points—from blood testing, to health management, to water and home testing, to remediation of known hazards. The second installment of a series by Reuters acknowledges that facts about lead poisoning are hard to come by, but the stories of people’s suffering are compelling. That’s also the lesson of the “Toxic Neglect“ series in the Cleveland Plain Dealer, which over nearly two years has documented failure after failure by public officials to carry out their missions and accurately report their outcomes.

While necessary, media scrutiny of public programs may not be sufficient to trigger real change. That’s why politicians in election mode are scrambling right now. But without ongoing civic engagement, the pols’ interest in getting to the bottom of the problem may wane. One civic effort to address lead poisoning in Pittsburgh, the Women For A Healthy Environment, has undertaken a community education program around lead-in-water issues. As of now, however, there doesn’t seem to be a vehicle for grassroots political involvement.—Spencer Wells

Thanks to Mila Sanina of Public Source for contributing to this story.