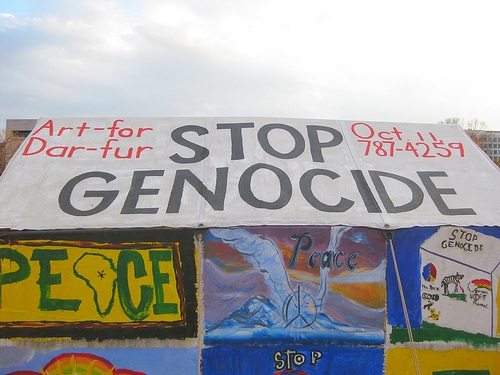 In the U.S., the predominant feeling about the news is that it’s “short attention span theater,” but without the humor. For a couple of weeks, we were mystified by the bellicose rhetoric of North Korea, which seemed ready to storm across the DMZ under Kim Jong Un’s leadership. Then the Boston Marathon bombings made the prospect of war on the Korean peninsula a dim memory, and the disaster in West, Texas barely got a few seconds of attention in comparison to the 24/7 coverage of the hunt for the Tsarnaev brothers on CNN.

But think back. Do you remember the genocidal warfare of the Sudanese government in the Darfur region? Do you remember that the head of the Sudan, Omar al-Bashir, is actually a top criminal wanted by the international court in The Hague? Joan Hecht, the founder and president of the nonprofit Alliance for the Lost Boys of Sudan, hasn’t forgotten the 400,000 people killed and 2.5 million people displaced in Darfur since 2003 by the Janjaweed militia, sponsored and armed by the Sudanese government.

Alluding to the pledge of “Never Again” after the Holocaust that murdered six million Jews during World War II, Hecht says, “we have not upheld that promise in regards to the people of South Sudan, Darfur and the Nuba Mountains, and for that…(t)he world owes them a tremendous apology and a firm commitment to do better in the future.”

That doesn’t seem to be happening here. Although al-Bashir can’t visit the U.S. because he might be collared for a date with the International Criminal Court, he is sending a delegation of government representatives to the U.S. to meet with officials of the Obama Administration. The Sudanese delegation is headed by Nafie Ali Nafie, a top advisor to al-Bashir and reportedly a participant in mass killings. An organization representing Holocaust researchers and survivors, the David S. Wyman Institute for Holocaust Studies, has written to President Obama asking that he cancel the visit of the al-Bashir entourage.

What is the U.S. strategy toward Sudan’s regime? It’s hard to say. It may reflect President Obama’s belief that it is important to talk to world leaders regardless of their odiousness, thus his willingness in the past to connect with North Korea’s Kim and Iran’s Ahmadinejad. Last week, an Obama spokesperson, the State Department’s Patrick Ventrell, defended the Nafie visit on those exact grounds, in the belief that “engagements with this delegation can advance our policy goals in Sudan, and if we don’t make our arguments directly to the Sudanese, who influence and direct their country’s policy, our ability to affect change will be limited.”

It appears, however, that the most outrage is due to the presence of Nafie himself, who has acknowledged without regret his personal role in torturing Sudanese nationals. The Sudanese peace activist group Girifna issued a statement that said, “(t)he man the Obama administration will be speaking with has blood on his hands, quite literally.”

The Obama Administration has had various special envoys assigned to work on Sudanese issues, including Darfur, but some observers haven’t found much positive to say about their tactics or accomplishments. Special envoy Scott Gration, a retired general, was followed by career diplomat Princeton Lyman in the position, and now the Administration is considering former Ambassador to the Sudan, Tim Carney. In an unusual move for an NGO, Act for Sudan has contacted Secretary of State John Kerry asking him not to appoint Carney, who it believes would be yet another envoy too naïve and too solicitous of Khartoum.

But Darfur is off the radar screen for most of us. We aren’t weighing in to demand of the Obama Administration a strategy toward the Sudan that is better than the embarrassing strategy that Gration offered the Washington Post: “We’ve got to think about giving out cookies,” said Gration. “Kids, countries—they react to gold stars, smiley faces, handshakes, agreements, talk, engagement.” –Rick Cohen