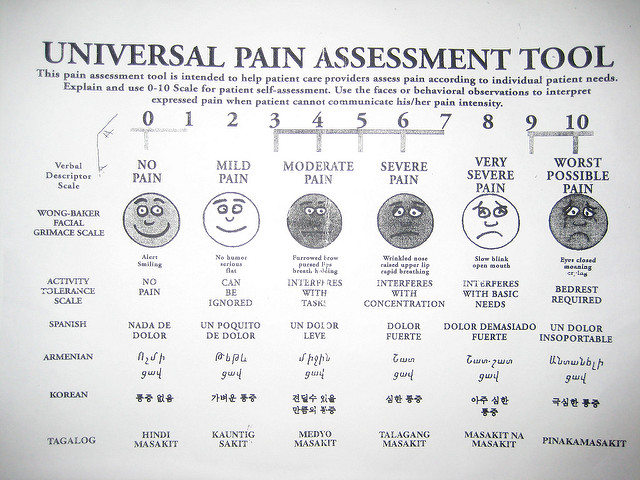 Earlier this month, during their annual meeting, the American Medical Association (AMA) publicly recommended that pain be removed from the panel of vital signs for which patients are assessed.

Assessing level of pain as a vital sign became common practice in the mid-1990s. Unlike blood pressure, heart rate, respiratory rate, and temperature, which are assessed and measured by a nurse or doctor, a patient self-measures his or her level of pain, rating it on a scale of one to 10.

This recommendation from the AMA comes from the desire to right the wrongs done by overprescribing opioids. There’s also some concern over how pain management is assessed on patient satisfaction surveys. Medicaid reimbursements to hospitals are impacted by how a patient rates the care he or she received, which includes how patients felt their pain was managed. Hospitals receiving a low rating do not receive the full reimbursement.

The AMA formed a task force in 2014 to look at this issue, and this recommendation follows from its conclusions. That same year, the Centers for Disease Control reported more than 47,000 drug overdoses, of which 61 percent were linked to opioids. The AMA invited several other specialized health associations to join this task force, including the American Academy of Pain Medication, the American College of Rheumatology, and the American Society of Addictive Medicine. The task force’s goals were:

Reduce the stigma of pain and promote comprehensive assessment and treatment

Expand access to naloxone in the community and through co-prescribing

However, critics of the AMA’s recommendations worry that the pendulum will swing too far the other way, causing physicians to ignore patients’ pain altogether. They argue that this approach is not a solution to the opioid epidemic, which already has people turning to heroin, as it has a cheaper price tag and can be easier to obtain.

Pain was added as a fifth vital sign to help the estimated 34 million Americans who reportedly live with chronic pain. The goal at the time of assessing pain in patients was to eliminate that pain. As Dr. Kristine Scruggs suggests, perhaps the goal should really be to reduce pain to the point that a patient can function and resume the activities of daily life. A focus on achieving a “zero” rating of pain may have contributed to the epidemic in the first place.—Kelley Malcolm